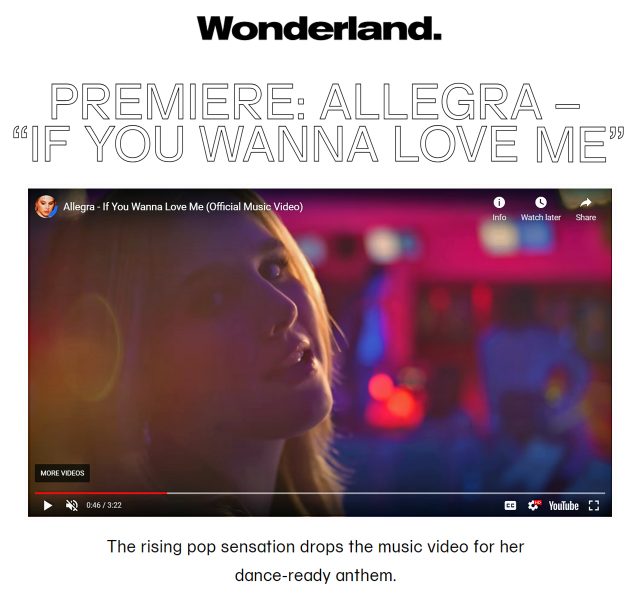 Wonderland Premiere: Allegra Drops the Music Video for New Single “If You Wanna Love Me”

International pop culture magazine Wonderland have premiered the music video for Allegra’s latest single “If You Wanna Love Me”. The UK pop singer has become known for dance-fueled kiss off tracks and anthems of defiance – and nowhere is this more apparent than on the the new single.

Produced by Scott Stoddart of the hit-making Audiofreaks stable, who delivers a mix of bright disco house grooves, “If You Wanna Love Me” blends the distinct flavour of Jessie Ware‘s latest productions with Dua Lipa‘s flair.

Taking to a bowling alley with friends, the pop artist serves up the neon-infused lighting and choreographed routines synonymous with the genre she is currently working towards dominating, as the disco-tinged sound of her track is skillfully brought to life. Proving that she is ready to follow in the footsteps of the likes of Dua Lipa in becoming the world’s next pop superstar with her latest release, Allegra is most definitely one to watch. – Wonderland

Watch the video on Wonderland

Amassing over 3 million Spotify streams with just three released singles and quickly racking in 10 million TikTok views, UK-based pop artist Allegra is blossoming into a superstar-in-the-making. “If You Wanna Love Me” follows up her recent 2021 hit “Used to Miss You” which was supported by an official R3HAB Remix.

Her collaboration with R3HAB highlight’s Allegra’s potential to win over tastemakers and music makers alike, with big things coming her way as she enters the next stage of her career. Just this past weekend resident Kiss FM DJ Majestic debuted his own remix of “If You Wanna Love Me” on his mix-show.