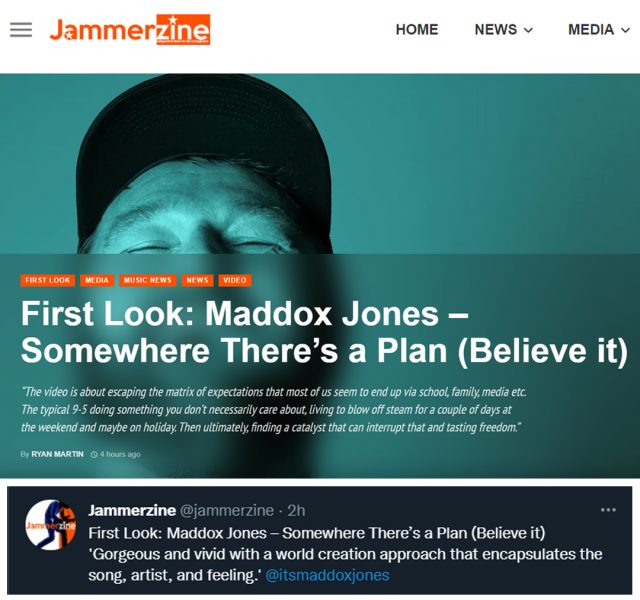 Directed and animated by Alex Gwyn Davies, the domino-like concept in the video is about “escaping the matrix of expectations that most of us seem to end up via school, family, media etc,” Jones says. “The typical 9-5 doing something you don’t necessarily care about, living to blow off steam for a couple of days at the weekend and maybe on holiday. Then ultimately, finding a catalyst that can interrupt that and tasting freedom.”

Providing the first look at the new video is Jammerzine, who praised both Jones’ infectious song-writing and Gwyn Davies animation style.

“Electronic funk with a dash of pop, Maddox Jones gives you a song that you feel through each nerve in your body. I got caught dancing to this during the review and believe it when I say I need to come up with some quick comebacks when I get made fun of later in the break room. But it was worth it to hear it. These are the tracks I love. The kind that make you actually want to respond with your body to.

The video, directed by Alex Gwyn Davies, is the perfect stylized animation for the music. It keeps to the beat and visualizes not only the style but the way the track moves as well. I could totally see this as a visual for this when played in a club. Gorgeous and vivid with a world creation approach that encapsulates the song, artist, and feeling.” – Jammerzine

Maddox Jones made his solo debut in 2020 with the synth-heavy electronica of his ‘Headspace’ EP. Well-received as that EP was, Jones is never one to sit still creatively – following the EP up with singles “World’s Gone Mad”,  “Can’t Wait For The Summer” and collab single with NIGHT/MOVES, “All For You”.

Now with “Somewhere There’s a Plan (Believe It)”, 2021 is shaping up to be just the tonic for the East Midlands singer-songwriter and his growing army of fans. With a debut album imminent, his work has been praised far and wide by SPIN, American Songwriter, the BBC, and many more media outlets across the globe.