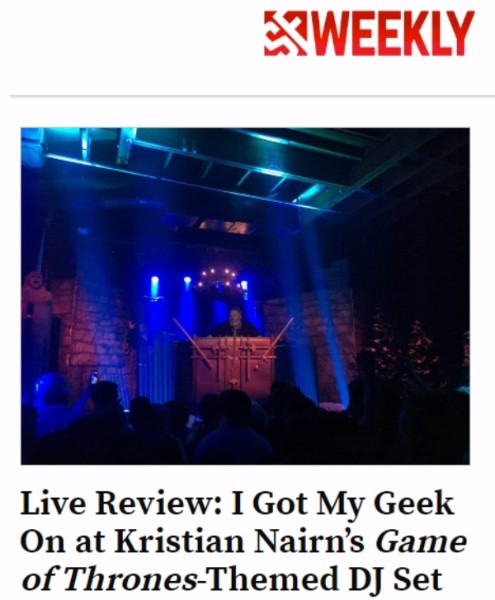 DJ Kristian Nairn brought his worldwide tour ‘Rave of Thrones‘ to San Francisco’s The Mezzanine this past Friday night, August 12, 2016. Rave of Thrones brought together dance music fans and Game of Thrones fans. SF Weekly was in attendance and captured all the events of the night. Read some of SF Weekly’s live review below, but be sure to head over to SFWeekly.com to read the full review.

Nairn didn’t disappoint, although I’m not sure how he could have let down his legion of followers. A true pro — for over a decade, Nairn was the club DJ at Kremlin, one of Belfast’s most established gay nightclubs — he stuck to his guns, reeling out cut after cut of deep and progressive house mashups. He didn’t pander to the masses with endless references to Game of Thrones, although he did indulge the crowd for a brief moment with an electronica take on the show’s famous opening theme.

Posted up behind a DJ booth bedecked in axes, swords, and other medieval weapons, Nairn was the perfect visage of a fantasy character embracing real life musical means. And even though half the crowd had probably never closed out a Friday night dancing at a chic nightclub, no one seemed out of place by the end of his performance. What started as a bunch of aimless dorks randomly bumping into each other coalesced into a friendly, unified dance party by evening’s end.

It’s safe to say that “winter is coming,” but all the Game of Thrones fans stayed warm together at the Mezzanine on Friday night.

Check out our Kristian Nairn playlist on YouTube below:

In 2015, Kristian Nairn released Up / Beacon (feat. Leanne Robinson) and 4Love (feat. Salt Ashes), both of which received rave reviews worldwide! Both singles are now available for download on iTunes & Beatport, and for streaming on Spotify & SoundCloud. For a full list of Rave of Thrones tour dates visitRaveofThrones.com