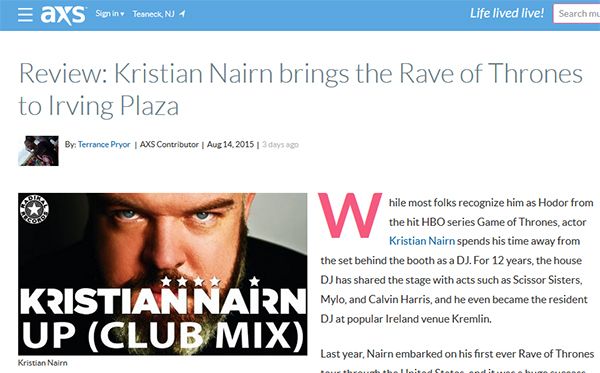 Last week, Kristian Nairn brought his Rave of Thrones tour to New York’s Irving Plaza. This was the second time Nairn has brought Rave of Thrones to New York City. This time, AXS was there to capture it all, from what the crowd was wearing to Nairn’s last song. “The thing that makes the Rave of Thrones unique is that you could dress up as your favorite character from Game of Thrones. Some folks wore coronets. Others wore circlets. One individual that night wore a Burger King crown. Whatever your monarchy status that evening, the event was a definite royal occasion,” says AXS.

Cries of “Hodor” engulfed the venue as Nairn arrived to the stage at 9:30 p.m. As he took off his glasses, the nearly 7 foot tall actor dug into his 90 minute set. Fire seemed to be the theme for his set; on the screen behind him, there were visuals of soldiers walking through fire, stars shooting out of a fiery pit, and a flame goddess dancing around to the music. Nairn didn’t say much during his time on stage, but his love for performing in the Big Apple was overt.

Nairn’s set was filled with explosive jams such as his debut single “Up (feat. Leanne Robinson)”, Junior Jack‘s “Stupidisco”, and Philip George‘s summer smash “Afraid To Love”. While his set was predominantly all things house, he did manage to deliver a monstrous dubstep drop. Ending his set with Soul II Soul‘s Grammy award winning track “Back To Life”, Nairn walked off stage right as the song started and greeted his fans in the front row.

“Up / Beacon (feat. Leanne Robinson)” is currently available for digital purchase and streaming worldwide. Nairn’s debut single “Up/Beacon” is available now on iTunes, and streaming on Spotify, Beatport and Bandcamp.

Nairn will continue his Rave of Thrones tour through October making stops in San Antonio, Washington D.C., and more! To find a Rave of Thrones date near you, please visit: www.raveofthrones.com