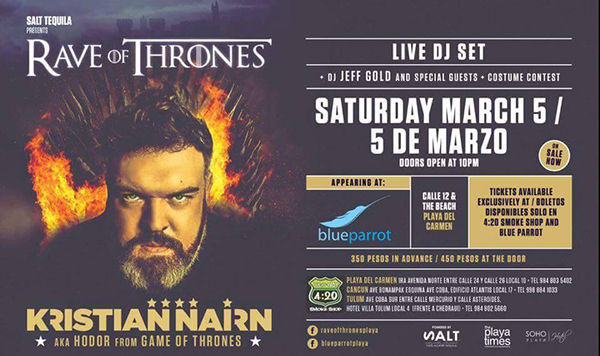 DJ Kristian Nairn, best known for his role of Hodor on HBO’s hit series Game of Thrones, is bringing is beloved Rave of Thrones to Playa del Carmen on Friday, March 5th. In preparation for the show, Nairn recently spoke with PlayadelCarmen.com where they spoke about the upcoming Rave of Thrones event, his DJing career, and much more. Check out some of the exclusive interview below but be sure to head over to PlayadelCarmen.com to read the full article.

On March 5th you’ll be playing a Rave of Thrones at a famous beach venue in Playa del Carmen called Blue Parrot. Is this your first time in Mexico?
It’s my second time in Mexico, so like last time I expect great food, friendly welcoming people and an enthusiastic crowd. I loved my first time, so it’s an honor to be coming back so soon!

You grew up in Northern Ireland and experienced a turbulent period of Irish history. How did that prepare you for Game of Thrones?
I mean, like many people in Northern Ireland, although it was a big part of my growing up, most of us try to put it all behind us, and get on with life. Things are very different there now and I’m immensely proud of the people and how far they have come.

How did you wind up becoming a professional DJ?
I learnt the skills behind it while I was at music college, and I always had a massive music collection. I was working at a nightclub, and the DJ called in sick. I offered to fill in, and the rest is literally history.

Which is more difficult acting or DJing?
Depends on the role and it depends on the gig!  Both are easy when going well.

How would you describe your style of music?
Moody, chunky, heavy rhythms and bass. Vocals thrown in here and there. I’m also a big synth fan.The more ’80s the better!