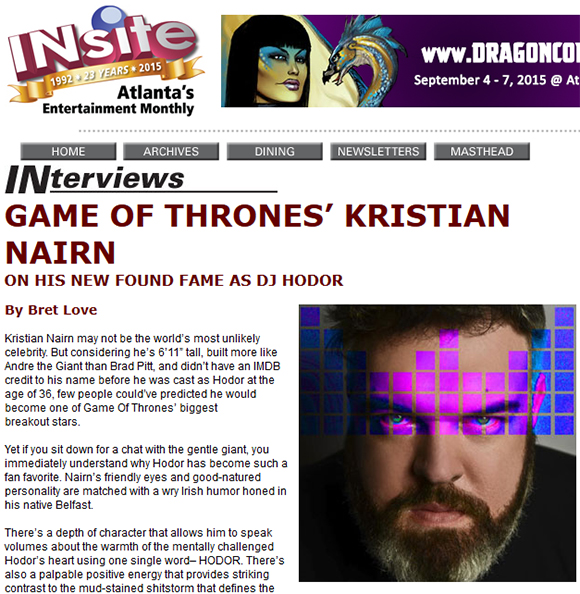 Kristian Nairn Featured in This Month’s Edition of INsite Magazine

This month’s issue of INsite Magazine, Atlanta’s Entertainment Monthly, features an in-depth interview with Kristian Nairn. Nairn may be most recognized in the US as the lovable Hodor on HBO‘s hit series Game of Thrones and one of the biggest breakout stars on the series, however in Ireland Nairn is mostly known as a DJ who has been spinning records at Belfast’s Kremlin for over a decade. Now here in the States, Nairn has been gaining quite the attention for his DJ skills and his recently released single. INsite Magazine spoke with Nairn, in which they discussed his debut single “Up/Beacon (featuring Leanne Robinson),” his DJ career, and much more. You can read some of the exclusive interview below, but be sure to head over to INsiteatlanta.com to read the full interview.

Let’s talk about your new single, “Up/Beacon.” How did you connect with Leanne Robinson?
I was looking for a special vocalist– a female, primarily– who sounded great singing in lower registers. A friend let me hear Leanne’s voice, and I loved it immediately! She is a very talented artist.

What was the feeling of finally releasing your own music for the first time? Is this a first step towards a full album?
I don’t know if an album is in the cards just yet. But I do have a lot of material waiting in the wings, so it’s just a case of figuring out what is the best way to share it with the world.

Were there any particular artists that influenced your early interest in music, outside of the techno realm?
Definitely. Kate Bush, Bjork, Gary Numan, Danzig and many heavy metal bands, to name a few. I could literally go on all day on this subject!

Where do you hope to see your music career go in the future?
I hope to see myself continuing to travel and produce music, really. It’s a great way to earn a living and see the world, and getting to connect with so many people all over the world is a powerful and joyous thing.

How do you foresee yourself balancing music and acting priorities in the future? Does each one fulfill a different aspect of your creative needs?
Both avenues fulfill me immensely, and it’s not really a case of juggling them. For me, it’s just a case of keep pushing! The more you do, the more you do… I love that old saying! There’s always time to do more work on something that you love.

Read more from this exclusive interview by clicking HERE

“Up / Beacon (feat. Leanne Robinson)” is currently available for digital purchase and streaming worldwide. Nairn’s debut single “Up/Beacon” is available now on iTunes, and streaming on Spotify, Beatport and Bandcamp.