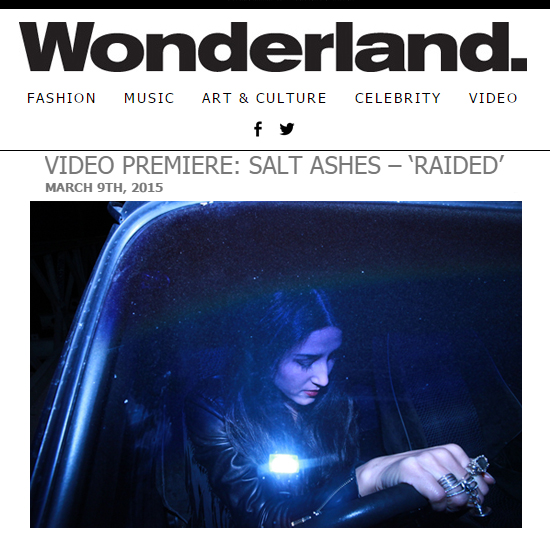 Wonderland Magazine has just premiered the music video for Salt Ashes’ new single, ‘Raided.’ You can pre-order ‘Raided’ on iTunes now, with the track being released worldwide tomorrow, March 10th, 2015 on Radikal Records.

Building on that ‘Raided’ has more complexity in its materials. The sparse, house-y verses take tips from minimal R&B, while the vocal sits firmly in the ethereal. Meanwhile, driving percussion is matched with pumps of electronics, wooshing pads and a chorus that catches you with first listen. With the video, Sanchez is exploring her dark side again. “I wanted to create something with a dark B-movie, late-night kind of vibe,” she says, “probably because I’d been watching a lot of Neo-noir, thriller movies at the time.” – Alim Kheraj (Wonderland Magazine)

The music video was directed by Debbie Scanlan and Liz Adams of De La Muerte Films, who worked with Salt Ashes on her previous video for “If You Let Me Go.” Check out the music video for ‘Raided’ below, and be sure to pre-order the track on iTunes.