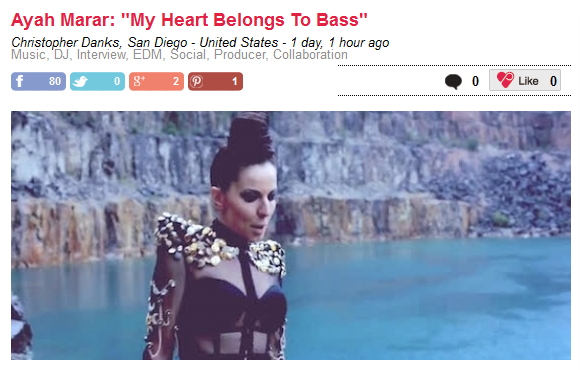 Pulse Radio had the opportunity to catch up with Ayah Marar to discuss all of her upcoming projects, including her single with Calvin Harris “Thinking About You” as well as her debut album “The Real.” Here’s  a small excerpt of what Pulse Radio had to say, and you can read the entire interview here:

Ayah Marar has been plying her trade as a singer and songwriter in the electronic world for some time now, and and even if you’re not familiar with the name, chances are you’re familiar with her voice and her work behind the scenes. Born in Jordan, she moved to the UK at the age of eighteen, and it was there that her music career began to take shape. Since then, she’s made a name for herself with huge singles like “Unstoppable” and “Beg Borrow Steal,” and her voice has made it on to massive songs like Calvin Harris’ “Thinking About You”.

Over time, her style has morphed and transitioned between pop and house (with a little bit of everything else thrown in too) but she’s recently taken a new direction, and embraced the style of big room electronic music that’s been making lots of headlines recently. Her record label, Hussle Girl, has been responsible for some very innovative music, and with such a dynamic resume, we decided it was high time we catch up with the legend herself and talk shop about music, life, and her work with other great artists.