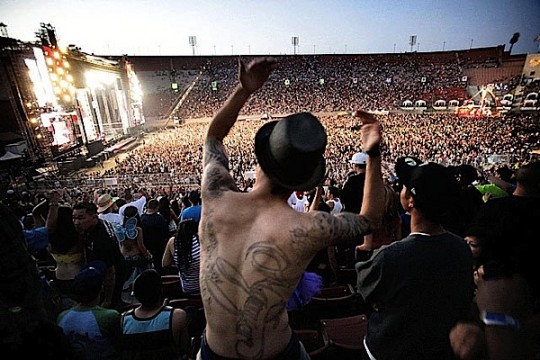 Electric Daisy Carnival’s return to Las Vegas was almost as dramatic as the festival itself. The spectacle ended early, shutting down the stages due to 70 mph winds. Veteran event planners, Insomniac handled the emergency with poise and didn’t let the winds ruin their spectacle. Clubplanet has an amazing recap of the extravaganza :

“Instead of DJs shutting down stages with mind-blowing beats, nearly all of the stages were literally shut down during the second night of this year’s three-day Electric Daisy Carnival (EDC)at the Las Vegas Motor Speedway. A massive windstorm canvassing the desert ran into this 100,000+ attendee/night desert rave, forcing an event full of scantily clad ravers to take a long and quiet chill pill. This total buzzkill was only amplified by the recent news of delusion-inducing bath salt face-eating madness. Jokes and references weren’t the only things flying high in this destructive windstorm.

On Saturday night, when the winds crossed over from annoying to dangerous, festival promotors, Insomniac, were on the wires ASAP, tweeting and posting this statement on their website. They chose to shut down Saturday’s experience to ensure the safety of talent, crew, and attendees. Fortunately, this unreal windstorm did not entirely blow away all that was to be experienced at this massive party parade.

For those who don’t know, EDC is a nocturnal rave that runs Fri-Sun from the hours of 7pm-6am. In 2011, the “flagship” edition of this multi-city festival moved to Las Vegas and was held during a record-breaking weekend of steamy July temperatures that exceeded 115 degrees. Fortunately, 2012’s June Mercury did not burst out of Daisy thermometers, and kept things manageable for the daytime schedule of pool parties, etc. that also took place during the days surrounding Daisy.

So. What else, besides hair-back-and-forth whipping winds, went down at this year’s EDC?

On Friday, two of the stand out sets belonged to Sebastian Ingrosso and Thomas Gold. Around 10:30, Sebastian Ingrosso got behind the decks at the Kinetic field and delivered a full on assault of rocking house beats. Thomas Gold, who was located in a slightly more intimate setting for his 11:15 set, was joined on the Cosmic Meadow stage by a full on drum-line, providing a wickedly dirty delivery of lederjosen-clad drummers and extraordinarily sick beats. In the end, Friday night’s recipient of Clubplanet’s unsanctioned Little Miss Daisy crown was given to Knife Party, who took their crowd on an indescribable journey of a brand new brand of madness.

On that next unpredictably shortened day, Saturday, Sander Van Doorn managed to squeeze a ton of deliciousness into a very tight space on the Kinetic Field, dropping crowd-pleasing faves during his 30 minute set, such as “Nothing Inside” featuring Mayeni, and later showing the crowd the light  with “Love is Darkness.” After Sander, Nicky Romero hopped on the decks and started his set off strong with his “Flash” remix of the Green Velvet banger. Saturday’s freak windstorm caused headliners such as Tiesto and Avicii to never set foot on their anticipated stages while others, such as Armin Van Buuren (AVB), were already on site when the winds began to gust. In a ramshackle twist of fate, AVB made lemonade out of windblown lemons by setting up camp behind his ASOT stage, for a live audience-less broadcast of EDC beats. Here, Armin tag-teamed with Markus Shulz, saving parts of Sirius XM’s exclusive live EDC broadcast, while tweeting, “That ends one of the most bizarre nights of my life.” Bold words for a globally revered superstar DJ. Needless to say, Armin received the Little Miss Daisy Saturday night crown, with Markus Shulz receiving an honorary tiara for also playing the only remaining stage, which had been haphazardly put together by Insomnia to quell the remaining windblown ravers.

Day three offered a charged energy of excitement with the unmistakable festival goodies that always turn up at the Carl Cox and Friends stage. Can a dance festival truly call itself that without that line-up of talent? Carl Cox, how do you do it? Umek warmed the evening (morning?) decks with ridiculous techno beats and John Digweed took over from there, doing his progressive, tech-y, elevating thang. After that, Carl took over and turned this party out. Suddenly, everything made sense again, with his fine breed of techno beats, shamelessly reminding ravers exactly what this desert trek to dance-town is all about. Everything always gels at the Carl Cox stage with new converts spawned at each and every performance. Carl Cox, wear that Little Miss Daisy crown LOUD and proud, because you earned it well for Sunday!

Insomniac carefully combines fantasy elements that create the land of fiction that is the Electric Daisy Carnival. The windstorm that attacked this pop-up nation of carnival rides, crazy costumes and fabulous talent only added to the surreal aspect of the festival, leaving attendees with undoubtedly (and perhaps unexpectedly) unforgettable experiences.”