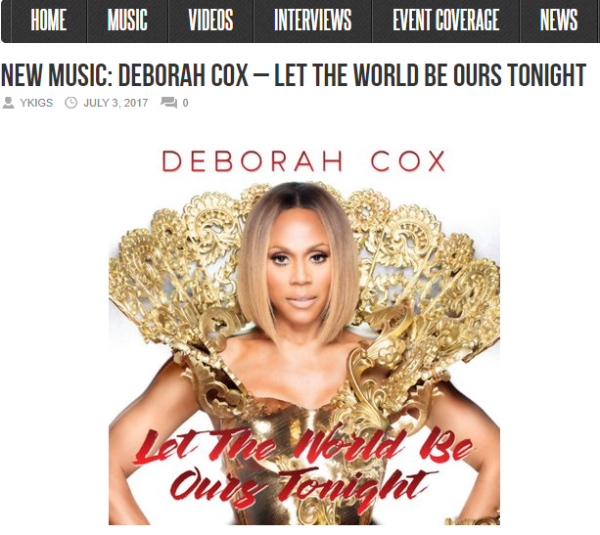 Grammy nominated singer Deborah Cox recently released her new single “Let the World Be Ours Tonight.” The song has been receiving rave reviews and made it’s “Hot Shot Debut” on the Billboard Dance Club Chart at #37 for the week of July 22nd. “Let the World Be Ours Tonight” has been featured on You Know I Got Soul. Check out the feature below, or visit http://youknowigotsoul.com/new-music-deborah-cox-let-world-tonight

Legendary r&b singer Deborah Cox returns with the brand new single called “Let the World Be Ours Tonight”. The uptempo dance feel to the song is reminiscent of some of her earlier hits, while her signature vocals shine as always.

As an added bonus to her fans, she’s also released multiple remixes of the song as well.

Currently, Cox has been touring the United States starring in The Bodyguard musical stage playing as Whitney Houston. She also recently released the project “I Will Always Love You” which was a tribute to Houston and featured covers of some of her biggest hits.

Back in 2015, she released the single “More Than I Knew” which was supposed to be from her upcoming album “Work of Art”. We even discussed the new music with her in an interview during that time. However, an album never came to fruition.