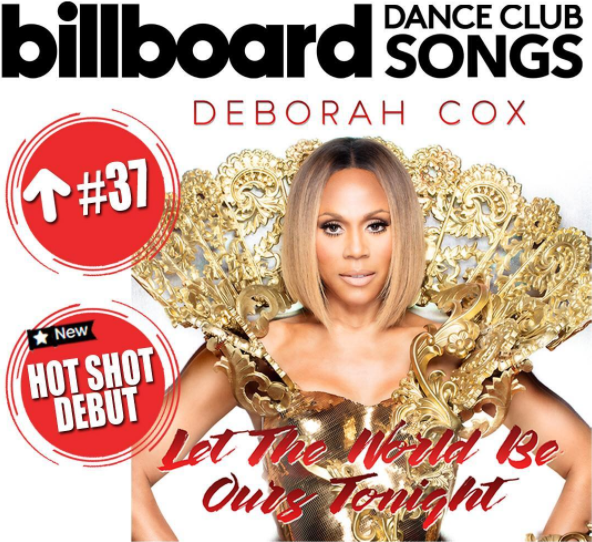 Grammy® Award-nominated and multi-platinum R&B recording artist and film/TV and Stage actress Deborah Cox recently released her stunning new single “Let the World Be Ours Tonight,” which has just debuted on the Billboard Dance Club Chart. The single makes its “Hot Shot Debut” at #37 on the chart for the week of July 22nd. The single is in good company on the chart along side Rita Ora‘s “Your Song,” David Guetta Featuring Justin Bieber “2U,” and Aggro Santos‘ “Bomba.”

Big thanks to everyone who has been supporting this record! Lets try to get “Let the World Be Ours Tonight” to #1, to mark Deborah Cox’s 13th number one on the Billboard Dance Club Chart!

Listen to “Let the World Be Ours Tonight (StoneBridge and Damien Hall Radio Edit)” on YouTube below:

Cox’s powerful vocal performance on “Let the World Be Ours Tonight” makes a strong statement about overcoming adversity. Throughout her career, Cox has become a beloved iconic figure in the LGBTQ community by spreading her message of acceptance, hope, and love.  In 2015, she received the Out Music Pillar Award; she was honored by The Harvey Milk Foundation at Diversity Honors for her efforts in the fight against HIV/AIDS in the LGBT community. In 2016, she was given the Liberty Bell and Proclamation in Philadelphia by Mayor Kenney to proclaim June 12th as LGBTQ Philadelphia Pride Parade and Festival Day.