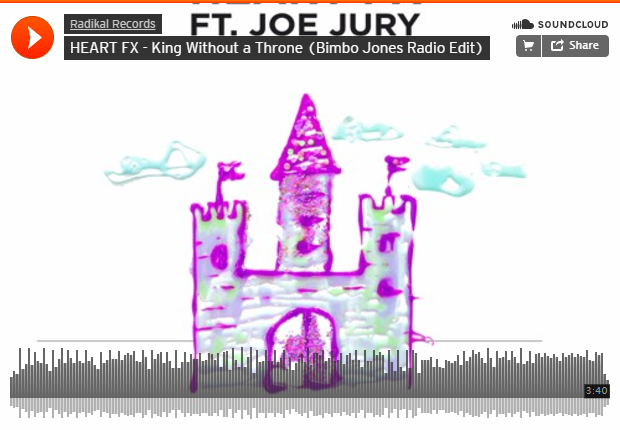 Radikal Records is gearing up for the release of HEART FX‘s feel good track “King Without a Throne (feat. Joe Jury)” on Friday, May 26th. This release includes remixes from some of today’s top DJs and producers including Bimbo Jones, KC Anderson, Pri yon Joni, and more. You can listen to the Bimbo Jones Remix on Soundcloud now prior to it’s official release! Stream the track below:

Stream “King Without a Throne (Bimbo Jones Radio Edit)” on Soundcloud below:

Austrian duo HEART FX is kicking off summer with the North American release of their single “King Without a Throne (feat. Joe Jury).” HEART FX is made up of Markus Schulz and Mario Staniek, two talented producers who have worked with some of today’s top artists including Meghan Trainor and Delany Jane. The duo has the ability to mesmerize electronic dance music lovers, which is exactly what they have done with their single “King Without a Throne.”

“King Without a Throne” is already making waves across the electronic music scene worldwide and is the one track you’ll have on repeat all summer long. The single hits the clubs and music festivals with a simple message; “everyone gets lonely and nostalgic at times.”  British singer-songwriter Joe Jury lends his emotive and powerful vocals to the track. His lyrics speak of the anxiety that affects many young people these days as they strive for happier times ahead in the uncertain world we live in. Don’t let the song’s deep message fool you, its trap-like chorus is guaranteed to get any party going and packs a punch that is perfect to electronic music lovers. The single is on trend with the clean minimalist electro-pop production that has been dominating the global charts right now. “King Without a Throne” appeals to fans of The Chainsmokers and Kygo alike.

The Radikal Records release of “King Without a Throne (feat. Joe Jury)” includes remixes that feature new interpretations from Bimbo Jones, Pri yon Joni, KC Anderson, and more.  The single will be available for digital purchase Friday, May 26th on Amazon, iTunes, Google Play, and Bandcamp. It will also be available to stream on all major streaming platforms.