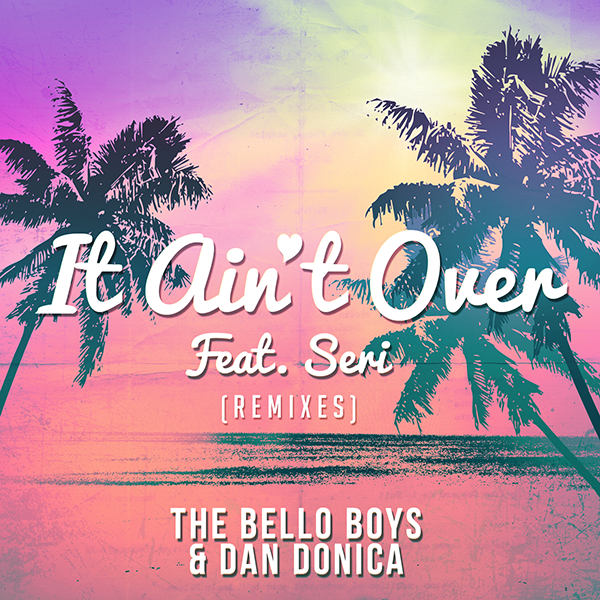 Today, Friday, September 16th Radikal Records has released the exclusive remix package of The Bello Boys and Dan Donica’s irresistible single “It Ain’t Over,” which features the powerful vocals from singer-songwriter Seri. “It Ain’t Over” has been heating up dance floors worldwide, and with the support of these brand-new remixes has charted on the Billboard Dance Club Chart.

The Bello Boys, made up of Ted Bello, KC Anderson, and Sean “Hollywood” Hamilton, are a team of DJ producers from New Jersey/New York City. Ted Bello is producer and accomplished guitar bass player, whose talents has allowed him to tour all over the world. KC Anderson is a professional DJ with a career spanning hot spot nightclubs, dance radio DJ and on-air personality, and a chart-topping producer. Sean “Hollywood” Hamilton hosts “Hollywood Hamilton’s Remix Top 30,” where he counts down the 30 biggest songs of the week.

The Bello Boys enlisted on Dan Donica, a DJ producer and musician who studied piano and composition at the Conservatori Arrigo Boito in Parma, and Seri, a successful EDM vocalist, whose singles include “Love Rain Down” with Markus Schulz and “Ready To Fall” with 4 Strings, to help create this incredible dance anthem, “It Ain’t Over.”

The “It Ain’t Over “remix package includes new interpretations of this high energy club hit. The release includes remixes from some of top’s top DJs and producers including Bimbo Jones, StoneBridge and Damien Hall, Pri yon Joni, and more.

“It Ain’t Over (feat. Seri) [Remixes]” is now available for digital purchase on iTunes, Bandcamp, and Beatport. It is also available on Spotify and other streaming platforms.