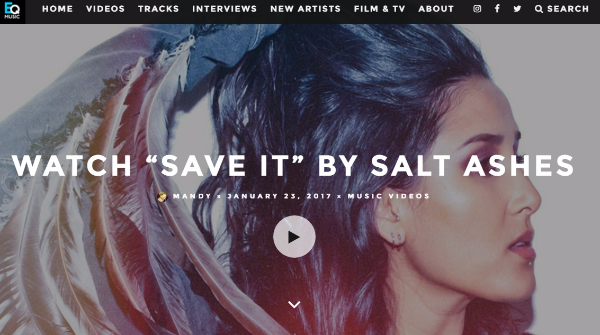 Emerging electronic singer-songwriter Salt Ashes debuted her brooding new music video for her lead single, “Save It.” The lead single can be found on her self-titled debut album, which was released in the summer of 2016. The music video originally premiered on Billboard, and has now been featured on music blog EQ Music. Check out EQ Music’s awesome write up below, and be sure to visit EQMusicblog.com for more!

Last summer this little lady spun us into a discotastic frenzy with her dance bop “Save It”. Impressing us to no end with its unashamedly club ready drenched beats, matched with Salt Ashes deeply lyrical style giving us an anthem that didn’t bow to current trends.

We were hot on this one, as “Save It” had all the classic traits of longevity going for it. A perennial high energy dance track which is clubtastic, whilst, unravelling a profound story of love conquering all, listening to you heart when the odds from outside forces have been stacked up against you.

“Save It” switches from intense to euphoric in the flash of a hot disco beat and this is largely the appeal of it which has seen it grow from strength-to-strength, gathering momentum and major recognition for the past 8 months. As it continues to work its unfeigned and honest, electronic pop spliced magic out to all to appreciate, the track is now supported by an intensely moving video that does an excellent job of reinforcing the passion and overwhelming desire to fight for the love you deserve.