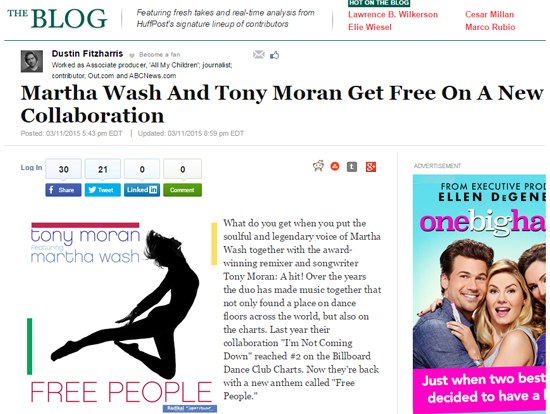 The Huffington Post has featured Tony Moran and Martha Wash for their recent collaboration on “Free People.” The new single follows up their previous collaboration on “I’m Not Coming Down” last year, and “Keep Your Body Working” in 2007 which hit #2 and #1 on the Billboard Dance Club Chart respectively.

For the feature writer Dustin Fitzharris spoke with both Moran and Wash about the inspiration behind the track and what it was like to collaborate together again.

“In a time where people Photoshop their faces because they worry about if they’re too thin or too fat or too ugly or too dark, you should just care about the way you want to look for yourself. You have the power,” Moran says about the song he wrote and produced.

For years Wash has personified the message in “Free People.” From her early days with Sylvester with singing partner Izora Armstead to hits like “Just Us” as Two Tons O’ Fun and then later as The Weather Girls with “It’s Raining Men,” Wash has never let preconceived notions on image stand in her way. She set the music industry on fire in 1991 when she sang the lead vocals on C&C Music Factory’s #1 hit, “Gonna Make You Sweat (Everybody Dance Now),” but failed to receive credit because her size was deemed unmarketable. She won a lawsuit, and by speaking up for herself, it is now mandatory for artists to receive rightful credits on albums and music videos.

Martha, what is it about Tony that you love?

Martha Wash: He’s worked with the best over the years and made hits for them. He’s been able to do that year after year. We just go in the studio and talk about what needs to be done and basically do it. We’re comfortable enough with each other that we can read each other and figure out where a song needs to go.

Tony: People are constantly being introduced to her voice. We are basically underdogs working together. It’s not like we have Clive Davis’ staff with us. We’re looking to put out good music in a time where music is in such a state of purgatory with streaming and mashups. The one thing you can really hold on to is an artist’s performance, and Martha has always been there to make herself available.