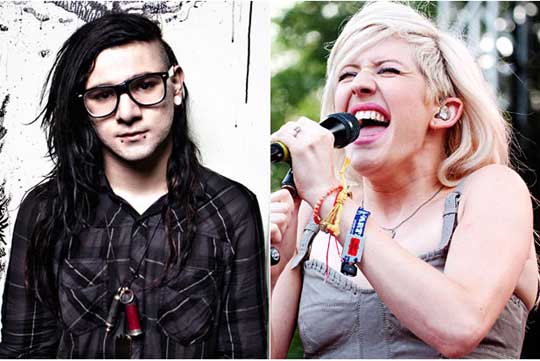 Swedish House Mafia To Collaborate With Skrillex And Ellie Goulding

Today Billboard announced that Swedish House Mafia has a collaboration in the works with 2011 Grammy Winner Skrillex and his EDM vocalist girlfriend, Ellie Goulding. SHM’s Sebastian Ingrosso added, “Ellie and Skrillex came in 30 minutes late, and we had already started with a melody. Skrillex freaked out, he loved it, and after a few hours we wrote the song.”

The session was orchestrated by Dave Rene, head of A&R at Interscope Records. It was Rene who reached out to OneRepulic’s Ryan Tedder to do the vocal remix of the Swedish House Mafia’s hit single “Calling (Losing My Mind).” Now an EDM matchmaker of sorts, Rene has done it again with an all-star collaboration that will surely result in a chart topping smash.

The release date and and album and destination is yet to be determined. ” It is unknown when or wear the release will show up, “I think it’s going to be for [Ellie’s] album, but in this business you don’t know until you see it on iTunes”, Ingrosso predicts.

Let’s hope the release lives up to the buzz!