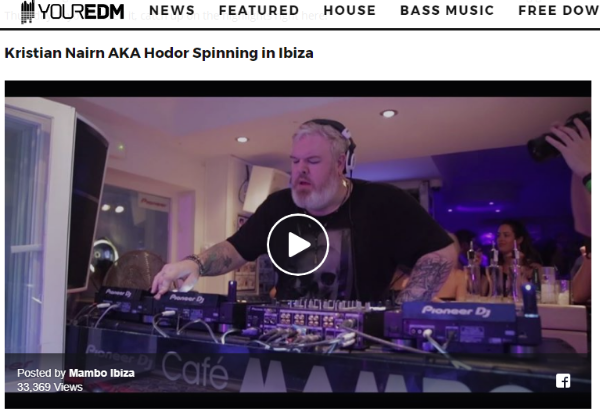 Since the release of his third solo single “Bigger,” DJ / producer Kristian Nairn has been DJing around the world. Last week, Nairn crossed a huge milestone by performing for the first time in Ibiza. Nairn has been featured on YourEDM for this great accomplishment. Check out the feature below along with a video from his set in Ibiza.

Hold the door! Hodor spinning in Ibiza has to be the best thing we’ve seen today!

Kristian Nairn was a DJ long before he was ever on Game of Thrones, and he continues to practice his craft (especially now that he’s been killed off the show, RIP). Oops, spoiler, kind of… But, if you’re that far behind in the series that’s your own fault.

The progressive house DJ fittingly played at Middlelands music festival this year, and before that embarked on a tour called “Rave of Thrones.” Now, the icon has crossed another DJ milestone having played a show in Ibiza. One of nightlife’s best clubs Mambo Ibiza shared some epic footage of Kristian Nairn behind the decks during his first gig in the party capitol.

“Still buzzing from when the incredible Kristian Nairn from #GameOfThrones chose us as his first Ibiza gig last Thursday! If you missed it, catch up on the highlights right here!”