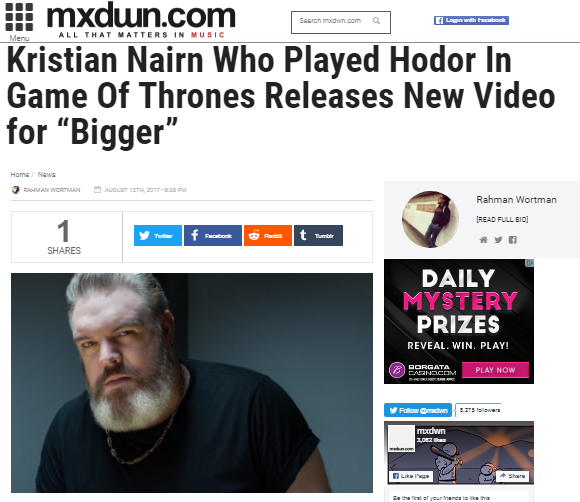 Last week, DJ Kristian Nairn released his third solo single, entitled “Bigger,” via Radikal Records. The DJ also released a music video for the single, which captures Nairn at stops on his Rave of Thrones tour. Mxdwn has featured the single and music video on their site. Check out their feature below and visit mxdwn.com for more!

Northern Irishmen Kristian Nairn is usually known as the beloved character Hodor from the critically acclaimed HBO television series Game of Thrones. However in recent years the lovable gigantic actor has been making efforts in showing that his talents aren’t only made for acting but for music well. While touring around the country bringing his live DJ set titled “Rave of Thrones,” to different cities, the DJ/producer released a video for his new song “Bigger,” this Thursday August 10th.

The visuals to “Bigger” consist of Nairn traveling to different destinations to have each the crowd raving to his DJ set “Rave of Thrones.” Whether the location is at club or by poolside, the house DJ brings an energetic bliss that spreads through the crowd while some type of Game of Thrones visual, such as a dancer dressed as the or dragon floaties, can be seen throughout the event. When describing the feeling of his new track on his record label’s website, Radikal Records, Nairn stated “I’ve been fortunate enough to tour the world over the past few years playing at some of the most amazing venues, with such incredible crowds, and this track really evolved from the sound of my live set. This is a much bigger sound for me than any of my previous releases, hence the name, and I can’t wait to have it out in the world,” and from the looks of the video “Bigger” seems to have the ability to channel the enthusiasm out of the crowd so that wherever Nairn spins he knows that energy is in his hands.

Below you can check out Nairn’s new video “Bigger.”