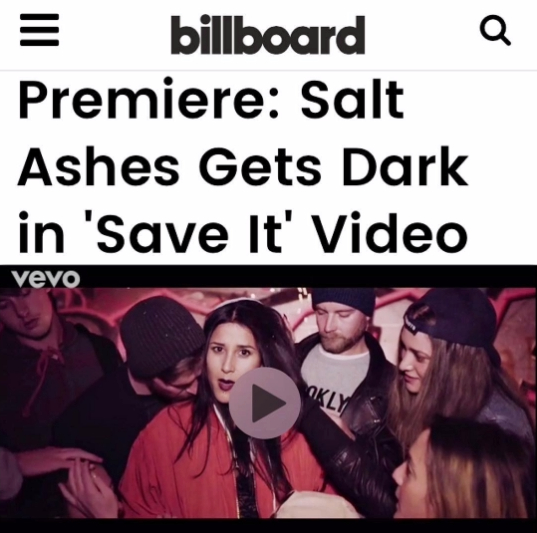 World renowned music publication, Billboard has premiered the brand new music video from emerging electronic singer-songwriter Salt Ashes — real name Veiga Sanchez. The singer and dance artist who hails from Brighton, England, is busting into 2017 with the release of the brooding music video for “Save It.” The song from her self-titled debut — released in July 2016 — Sanchez’s trademark blend of dance music with darker themes comes across loud and clear on the single.

Salt Ashes spoke exclusively with Billboard about the inspiration and meaning behind “Save It” and the music video.

“I wanted to create an abstract and artistic piece of work that mixed darkness with beauty and sexuality with rebellion,” said Sanchez. “The song is about fighting for a love that others don’t approve of, so aside from wanting to portray the obvious intense passion there’s a lot of tension and defiance within the song that I wanted to come across.”

Shot in two cities, and three separate locations, this “darkness” is portrayed visually within the video’s séance sequence — as well as lyrically as Sanchez laments, “They said your kiss would poison mine/ And it’s nothing I can trust/ But my veins won’t ease the flood/ ’Cause I still can’t get enough.”

“The idea behind the video was to contrast scenes of a ritual and a séance, to symbolize others trying to expel our love for each other, with darker, faster paced, scenes of unbinding passion and rebellion against those people,” said Sanchez.

For more from Billboard, visit: Billboard.com

Salt Ashes self-titled debut album  is now available for purchase in record stores nationwide, on Amazon, iTunes, Bandcamp, Google Play, and in the Radikal Records web-store. It is also available for streaming on Spotify.

Brand new mixes of the lead single can be found on ‘Save It (UK Mixes)’ which is available now for digital purchase on iTunes, Bandcamp, and Beatport. It is also available for streaming on SoundCloud.