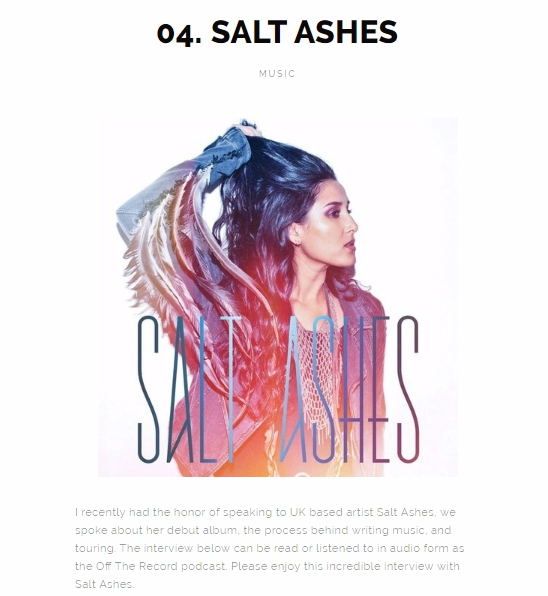 Electronic Singer-Songwriter Salt Ashes’ Exclusive Interview With Off The Ropes

Brighton-based electronic singer-songwriter Salt Ashes, who released her self-titled debut album last month, recently spoke with Off The Ropes about her debut album, the process behind writing music, and touring. You can read some of the exclusive interview below. You can also head over to OffTheRopesNetwork.com to listen to the full interview.

Oscar: Where did you come up with your name ‘Salt Ashes’?
Salt Ashes: Simply they were these two words scratched on the side of this boat, not really a boat but a canoe type thing on Brighton Beach. I saw those two words scratched on the side of the boat and at the time I wanted to use it as a song. It never really made it and I didn’t think I could make it work and when I was trying to decide what I was going to be called that (Salt Ashes) kept coming into my head.

Oscar: Do you listen to the same type of music you play? Who do you listen to?
Salt Ashes: Not really, its quite eclectic. Many musicians that I know say that they listen to everything and at the moment I’ve just been put on to a band called Whitney which I’m really into and I still love this UK artist called Nao and I think she’s signed to to do some big things in the states. I’d say she’s more similar to my stuff than any other things I listen to.

Oscar: Who influenced you? What kind of music were you listening to growing up?
Salt Ashes: It was varied. I don’t come from a musical background so my musical knowledge came from whatever was on the radio or what my brother and my sister were listening to. My brother would listen to indie rock bands like Coldplay and Nirvana. My sister listened to Madonna, early Madonna and that is what influenced me most.

Oscar: Listening to your music there is a sense of energy and fun but also personal lyrics and meaningful titles. Talk about the process of writing a song.
Salt Ashes: The song titles always come at the end for me actually. I usually write a whole song then look back over it and think what is the best title for the song. Sometimes I would write a song without even being aware of what it’s about until very close to the end when I’m like “okay let me sit back now and have a look at what I’ve written” and what has just come out of my mouth and then I’m like “oh wow this is about that”. Sometimes I’m not even conscious of what it’s about until the very end.

Oscar: With your debut album launch party, what was the feeling to finally get to play your songs live?
Salt Ashes: It was awesome, it was so humbling I was completely overwhelmed with everyone there and how it was received. It’s really nice to know most of the people there would listen to the album and come on the premise of enjoying the album. What’s important now is what happens next and how the album is received.

For more from this exclusive interview, visit: OffTheRopesNetwork.com