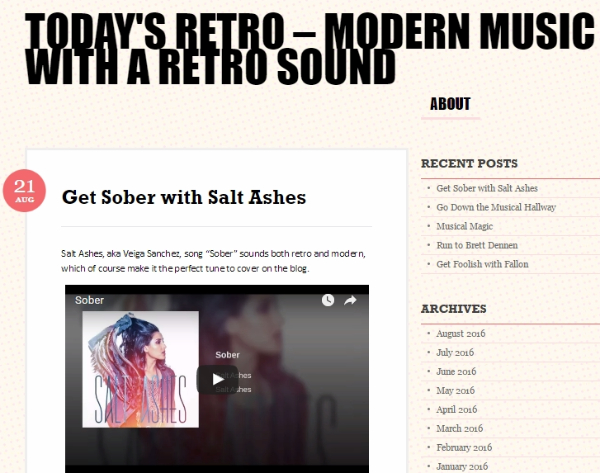 Rising electronic singer-songwriter Salt Ashes released her self-titled debut album last month, and it has been receiving rave reviews worldwide. Music blog, Today’s Retro– Modern Music With A Retro Sound has featured the songstress’ track “Sober,” which can be found on her debut. Check our what Today’s Retro had to say about “Sober” below and be sure to head over to TodaysRetro.com for more review and music news.

Combining vocal stylings of some of the best and noted songstresses of the past few decades Salt Ashes brings the groove of the 80s Madonna style , think “Into the Groove” and a bit of her vocals as well, along with dashes of Lana Del Rey and Gwen Stefani into the track all the while keeping her own identity.

It has an uptempo beat and Sanchez goes back and forth between slower vocals on the verses to a peppy performance on the chorus. And speaking of the chorus it is one of the catchiest hooks one will hear all year long, begging to be played in dance clubs and on top 40 radio. Sanchez’s ability to show vulnerability in a pop/dance song amongst electronic sounds is a great feat and showcases how talented she is.

Clearly the song is rooted in today, edgy and full of modern beats, but at the same time this could have been a hit in the 80s and it’s really easy to picture an artist like Madonna making it a number one song. Yet one can also see Sanchez making this her own and meshing sounds together to make the tune something that can span generations and decades.