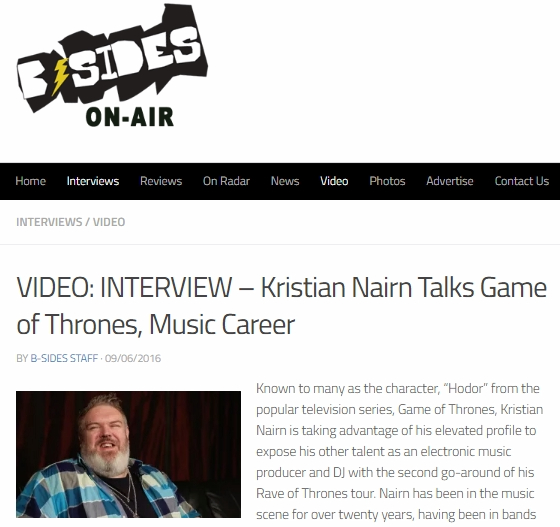 Kristian Nairn may be most recognized as the lovable Hodor from HBO‘s hit series Game of Thrones, but he is also an extremely talented electronic music producer and DJ. Nairn has been bringing his tour Rave of Thrones around the globe, making stops in the US, Dublin, Moscow, and more! The DJ recently spoke with B-Sides On-Air host, Pete Mar, where they discussed his music, Rave of Thrones, his thoughts on the future of Game of Thrones, and more! You can watch the exclusive interview below, but be sure to head over to B-Sides On-Air for more!

In 2015, Kristian Nairn released Up / Beacon (feat. Leanne Robinson) and 4Love (feat. Salt Ashes), both of which received rave reviews worldwide! Both singles are now available for download on iTunes & Beatport, and for streaming on Spotify & SoundCloud. Find a Rave of Thrones tour date near you at: raveofthrones.com