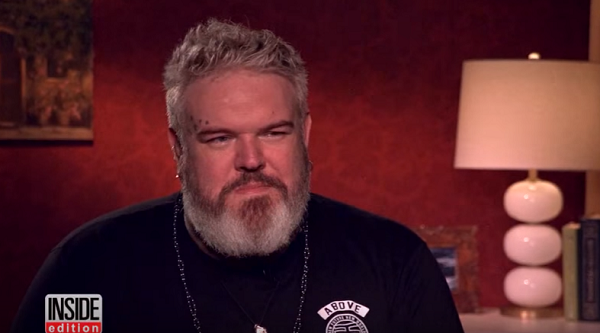 Kristian Nairn Sits Down With CBS’ Inside Edition

During his recent spot to New York City, DJ Kristian Nairn caught up with CBS’ Inside Edition for an exclusive interview. Nairn spoke with Sal Bono of Inside Edition about how he began his DJ career, his new single “Bigger,” and of course there were some Game of Thrones questions. Check out some of the exclusive interview below. Click the video player to watch the full interview. Be sure to visit InsideEdition.com for more!

The Northern Irish artist started his career as a musician, performing with bands like the Scissor Sisters and spinning records in Belfast for a number of years before turning to acting.Nairn said he was called to audition for the cult comedy Hot Fuzz, starring Simon Pegg and Nick Frost, and while he didn’t get the role, it led to something big.

“I was DJing the night before [in Belfast], traveled to London, did this awful audition and I didn’t hear anything about Hot Fuzz,” he recalled. “About four or five years later, I got a call from the casting director who said, ‘There is this project, Game of Thrones, coming up. I just can’t think of anyone else for the part.'”

Nairn didn’t know anything about the Game of Thrones books, but auditioned for the role of Hodor, and as he puts it, “The rest is history.”

But the George R. R. Martin literary series already had a big fan in Nairn’s mom, who was thrilled when he got the role. “My mother was a huge fan of the books and when I told her the news, she completely flipped,” he said.

“It is a regular DJ set for me, I don’t do anything too different,” he admitted.

Nairn, who released his new single, “Bigger,” is currently touring the U.S. and revelers who flood the clubs are often surprised to learn he has another craft aside from acting.

“When I first got the part in Game of Thrones, people reacted and said, ‘This guy is a DJ — he is not going to be a good actor,’ he told InsideEdition.com. “When it came out that I was a DJ, people were like, ‘He is an actor — he is going to be one of those terrible celebrity DJs.’ I really had to prove myself all over again.”

He says he still keeps in touch with the cast and crew of Game of Thrones and “we see each other regularly,” adding that many come to see him perform.

For more from Inside Edition, visit: http://www.insideedition.com/headlines/25194-game-of-thrones-star-kristian-nairn-still-emotional-over-hodors-final-scene-its-really-weird