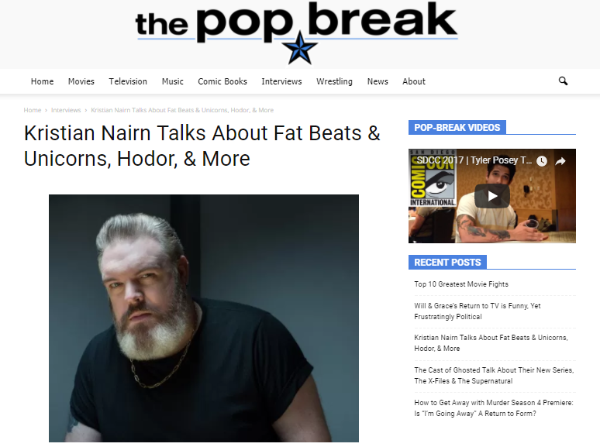 Before he ever stepped foot on the set of Game of Thrones, Kristian Nairn was a renowned DJ in the club scene. He held residence at Kremlin, one of Dublin’s most famed nightclubs, and toured the world both as a DJ, and with the likes of The Scissor Sisters, and Calvin Harris. Nairn has made time in his busy acting schedule to spinning at clubs, festivals, and even Comic Cons, as well as work on original singles, and EPs, like “Bigger” which was released this past summer. Nairn recently caught up with entertainment blog The Pop Break, where he spoke of his DJ career, his single “Bigger,” and much more. Check out some of the interview below, but visit ThePopBreak.com for more!

Recently, I caught up with Kristian to talk about his music, the celebrity DJ stigma, and of course, his time as Hodor on Game of Thrones, and the fame that’s come with it. I don’t often say this, but this man singlehandedly gave me the best interviews I’ve done in my 15 year career. While we may know him for uttering one word on television, when speaking with him you encounter a charming, no-nonsense, affable, and insightful man who truly loves music.

I’ve read you were of a musical prodigy growing up, you excelled at piano at a young age and then you turned to guitar. You even toured as a guitarist with the Scissor Sisters which I thought was super cool. So how did you end up in a DJ booth?
Well I was a prolific club kid, and I was always in clubs in my early twenties. I used to watch the DJ, and I was always impressed by how they could manipulate the energy and the mood in clubs just by their track choice. I really wanted to learn how to do that, because I was always a prolific music collector. I have such a large collection of music. A lot of my favorite things [growing up] was trying to introduce friends to new music and sort of trying to explain how I felt about it. I think as a DJ, you’ve got a whole crowd to do that with. You find tracks that you love and that you react to a certain way. And you want them to sort of react to it. I think it’s a real privilege to take people on a journey like that.

Was there a learning curve to getting into the groove – no pun intended – of being a DJ from a literal technical standpoint with the equipment as well as literally mapping this musical journey out?
Well [it was] easy. Because I’m quite a technical person, I have a rhythm, the rhythm is really important for a DJ. You’d be surprised how many DJ’s aren’t natural musicians. I can always tell the difference I think, from a DJ that’s just a musician and one that’s just a knob twiddler. [laugh]

I’ve seen video of you DJ.  I’ve covered DJ’s for a long time, and I don’t think I’ve seen many people get into it as much as you do.
Yeah I’m on another world. I go away somewhere.

What does that do?
I mean, like I said I just released this track [“Bigger”], I have another one ready to go and I forgot to play it last night [in Brooklyn].  I don’t have any agenda, I’m just in a little magical kingdom with unicorns and fat beats. I sometimes forget where I am and I forget the time and there are people yelling at me and filming me on their phones and I don’t notice them. I have my set on my iPhone to start, but I’m away somewhere else. I’m sort of in my own little non-drugged up fantasy.

Was that something you always got with music or is it just strictly to DJing?
I feel everything. I’ve always been very receptive to – emotions in music and my own emotions, I’m definitely an emotionally connected person and yeah I’m definitely, definitely affected by things that are not in that realm and I’m probably not on this plane of existence when I’m DJing.  When someone knocked your DJ buzz – I played, fucking, some dubstep and when I play it sometimes it’s like waking up a bear. You know? It’s like “What do you want?!”

And you just mentioned you dropped “Bigger” on Radical Records and the artwork is awesome. Can you talk about just piecing that song together, creating it? Talk about creating this song from scratch with beats and where the inspiration came from.
I’ve been searching for my sound for a while, and unfortunately I have a very, very tight schedule as well. I don’t have time to sit in my bedroom with Logic and play with 300 different bass drums just to make one sound right. So I go into the studio with a really talented engineer and you know, I’m blessed to be able to play the instruments myself. I don’t have to rely on anybody else so I’ll sit in a darkened basement in London and we sat for a few days and basically tried different combinations of basses and just put together a combination of sounds that I liked.

Not all of them worked, we have this sort of do it together in a way that I was happy with. But, I realized they weren’t quite right because they didn’t fit into my sets. I was like, that’s not right, I should be playing my own productions. They just weren’t driving enough for me. So I really needed to reinvent my sound. While I was very proud of them, they just didn’t sound right. Smack bang right perfect to be in my sets and it feels really good, to be honest.

Are you thinking of dropping a full-length record anytime soon?
Not really something I’m thought of. I mean I think – maybe an EP, I might put some EP’s together, but I haven’t really thought of an album. Maybe in the future I’ll put something together but definitely for DJ reasons but, yeah it’s track by track at the minute, I’m not really thinking about putting together an album just yet.

Read the full interview from The Pop Break: http://thepopbreak.com/2017/09/29/kristian-nairn-on-fat-beats-and-unicorns-smashing-the-celebrity-dj-image-hodor/