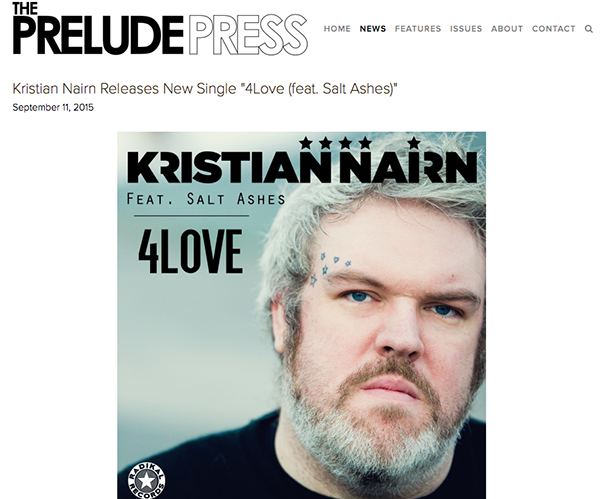 Kristian Nairn has released his latest single entitled “4Love,” which features the vocals of emerging electronic artist and label-mate Salt Ashes. Nairn released his follow up single on Friday, September 11th. The Prelude Press, online magazine for music lovers by music lovers, has featured the hot new single on their site.

“4Love” is reminiscent of 90’s house music with its heavy synths and upbeat piano melody. The new single comes with progressive house remixes from remixers MARAUD3R, Tonekind, and KC Anderson.

Excited to share his second solo release, “4Love,” with the world Nairn says, “This is my second solo release. This time I had the privilege to work with the wonderful Salt Ashes. I absolutely love the tone of her voice and I think it adds a very special edge to the track. Writing with Salt Ashes was such an effortless process because she has such a great feel for this type of track. We already have three great remixes and a few more coming.”

For more from The Prelude Press visit: www.thepreludepress.com