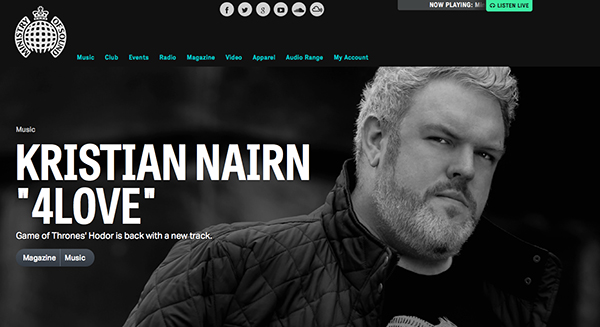 Today, Kristian Nairn released his new single “4Love,” which features the vocals from label-mate Salt Ashes. “4Love” is the follow up single to Nairn’s Radikal Records debut “Up/Beacon (feat. Leanne Robinson),” which received rave reviews worldwide. Ministry of Sound premiered “4Love” on their website with an exclusive SoundCloud player. Check out what they had to say about Nairn’s new single below:

After surprising the world with summer house banger, “Up (Club Mix)” back in July, Kristian Nairn AKA mother-flipping Hodor, from Game of Thrones is back with new track “4Love”, which we’re super excited to have the world premiere of right here.

“4Love” fits snuggly in the 90s House Revival category of your record collection, alongside your Biceps and your Billons. With heavy synths, soaring vocals and that joyous piano line, “4Love” sees Nairn continue to build on his burgeoning production career.

“This is my second solo release. This time I had the privilege to work with the wonderful Salt Ashes. I absolutely love the tone of her voice and I think it adds a very special edge to the track. Writing with Salt Ashes was such an effortless process because she has such a great feel for this type of track. We already have three great remixes and a few more coming.” – Kristian Nairn