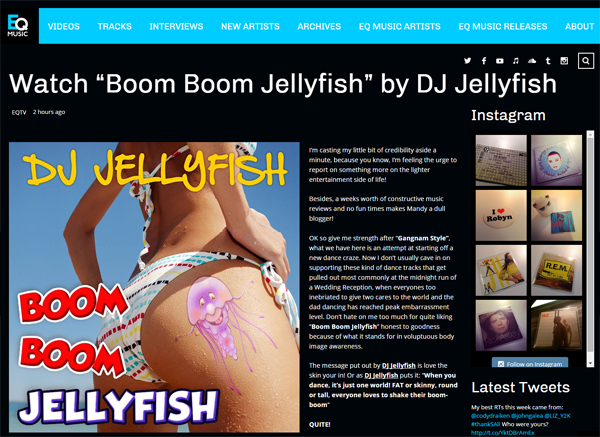 DJ Jellyfish’s summer dance anthem, “Boom Boom Jellyfish” has been featured on EQ Music. Feeling the urge to report on something more on the “lighter” side of entertainment news, the music blog praised the song’s dance moves, along with DJ Jellyfish’s message that dancing is meant to be enjoyed by everyone:

OK so give me strength after “Gangnam Style”, what we have here is an attempt at starting off a new dance craze. Now I don’t usually cave in on supporting these kind of dance tracks that get pulled out most commonly at the midnight run of a Wedding Reception, when everyone’s too inebriated to give two cares to the world and the dad dancing has reached peak embarrassment level. Don’t hate on me too much for quite liking “Boom Boom Jellyfish” honest to goodness because of what it stands for in voluptuous body image awareness.

The message put out by DJ Jellyfish is love the skin your in! Or as DJ Jellyfish puts it: “When you dance, it’s just one world! FAT or skinny, round or tall, everyone loves to shake their boom-boom”

Click Here to read the full write-up on EQ Music.

Watch the official dance video below or Click Here to check out choreographer, Tenealle Farragher’s first Tutorial video on the “Jellyfish Dance.”

“Boom Boom Jellyfish” is available for purchase on iTunes and it is available for streaming on Spotify, SoundCloud, and Bandcamp. Stay connected with DJ Jellyfish by following hisFacebook, Twitter, Instagram, and Tumblr!

Join the dance craze by filming and sharing your own version of the dance!