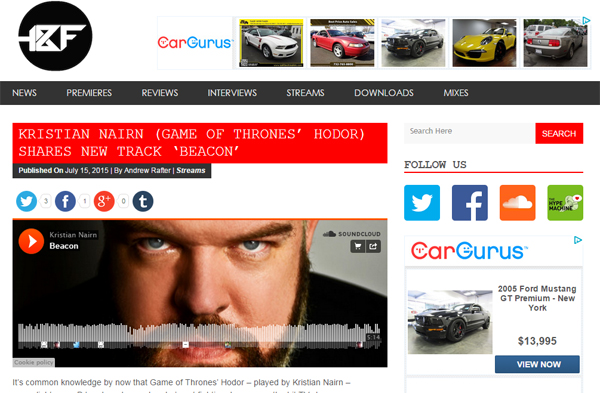 Kristian Nairn’s new single B-side, ‘Beacon’ has been released and it is already creating a buzz, being most recently featured on Harder Blogger Faster.

“It’s common knowledge by now that Game of Thrones’ Hodor – played by Kristian Nairn – moonlights as a DJ and producer when he’s not fighting dragons on the hit TV show. The actor has actually been the resident DJ at Kremlin in Ireland for eleven years, and has been producing electronic music for even longer.

Today, the actor shared the b-side from his new single, ‘Beacon’ and it’s actually really good, a heady mix of progressive house and electro, and while it’s certainly not what we were expecting, we can’t help but think his music career given time might actually surpass his work on Game of Thrones.

Speaking about the release, Nairn said,  “It’s been a long time coming, and I think ‘Up / Beacon’ and the material yet to come is a really good reflection of how I feel about house music. I’ve never been more excited to share ‘Up / Beacon’ and what else I’ve been doing in the studio with the world over the next months.”