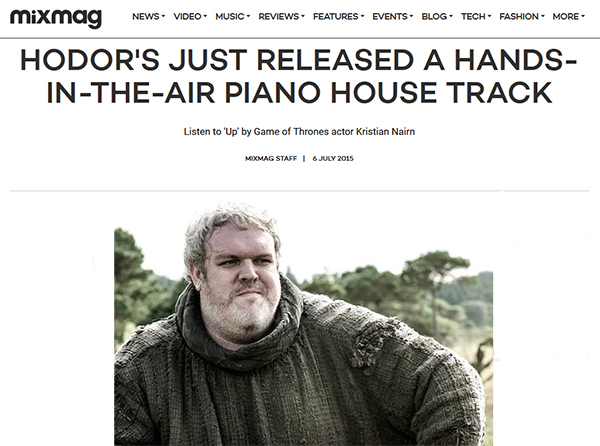 Kristian Nairn, most recognized as the lovable Hodor from HBO‘s hit series Game of Thrones, has just released his debut “Up/Beacon” this past Friday, July 3rd. Mixmag has featured Nairn’s lead single ‘Up,’ which features the vocals from former X-Factor contestant Leanne Robinson.

Nairn found time away from his Rave of Thrones tour to get into the studio to produce “Up/Beacon.” “Don’t think you’ll be hearing samples of his trademark “Hodor” line from GOT in ‘Up’ or ‘Beacon,” says MixMag.  Instead, you’ll hear an upbeat piano-laden hypercolour house with the dreamy vocals of Leanne Robinson.

Listen to ‘Up (Club Mix) featuring Leanne Robinson‘ below:

Nairn says, “It’s a really good reflection of how I feel about house music.” Nairn’s debut single “Up/Beacon” is available now on iTunes, as well as stream it on Spotify, Beatport and Bandcamp.