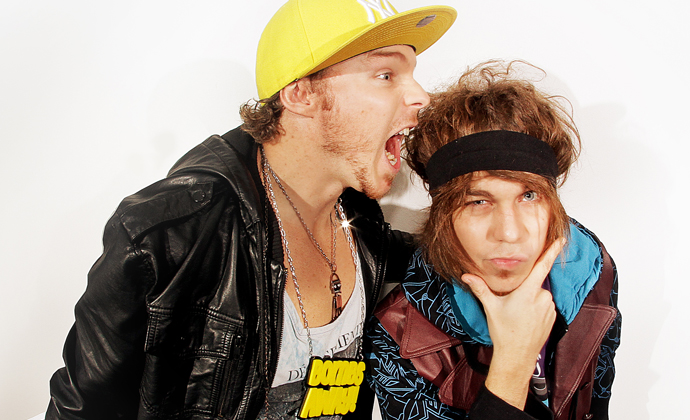 Joonbug Hangs Out With Bombs Away

If you were in Atlantic City last week, you probably heard or saw Bombs Away start a party in the pool at Harrah’s. If not, well, Joonbug has you covered with their cover story and interview for Bombs Away. The interview touches on some subjects like Miley Cyrus, guilty pleasures, the 52 states (yes, 52), and more. You can check out the full interview here, and a small preview of the interview below.

What are you guys listening to these days?

SKETCH: Miley Cyrus! [Laughs] No, not really. I’ve been listening to Savant, heaps. He’s not actually a savant, but he’s really, really cool! He’s just so…

TOMMY: Complex! He’s so melodic, just everything about him is brilliant.

S: He gets a bit of a Skrillex comparison because of the vocal cuts, but he’s just like, really, really complex. There are a lot of like, melodies within his structure that are just amazing.

T: Especially for electronic music, like, you usually get it a lot simpler, but he’s good.

S: Some of them have like, entire orchestral productions! A favorite one is Fat Cat Shuffle.

T: I think that’s off his first album.

S: Yeah…yeah! It’s an older one, but still so great.

S: So, yeah…I’d say Savant. And Australian-wise, we do a lot of work with him; his name’s Kones. He just did the preview mix for um…Robin Thicke? The Blurred Lines one? It was just a bootleg, but it’s gone crazy. I think it got like, 20 million views or something in a couple of weeks, so yeah, he’s really cool. He’s one of my good mates, but all of his stuff is so bumpy, like…super, super fun, so he’s good. He keeps with new stuff. Like, he just released this new track, This Is How Fkn Babies Are Made, um…and we just add it to our set, we just can’t get enough of it. So, it’s cool.

What is – in addition to Miley Cyrus, of course – are your guilty pleasures?

S: Musically, mine is 80s hair metal. I just…cannot, CANNOT get enough. Man! We’re actually halfway through a cover of Final Countdown. Big, big trumpet solos, it’s gonna be great. We’ve been working on it for like, two years, because you…you can’t release a song like that unless you nail it. But, I love it. 80’s hair metal is just like, the best! That, and like, epic power ballads. Yeah, just…ALL the time. If people would listen to it, we’d produce something like that.

S: Me, I love it…just heaps. I wanna try to get someone like David Bowie or someone on a track one day. We’re gonna get, like, our people to hit up his people and try and do a comeback tour, like an um…like an EDM track with one of the big guys.

S: It IS a great idea! I just came up with that like…right now, so you’ve got the scoop!

i enjoyed this product very much, but it can be a little too sweet but very tangy and tasty! Viagra generic? Sixty-three percent, 74%, and 82% of the patients on 25 mg, 50 mg and 100 mg of our medications, respectively, reported an improvement in their health.