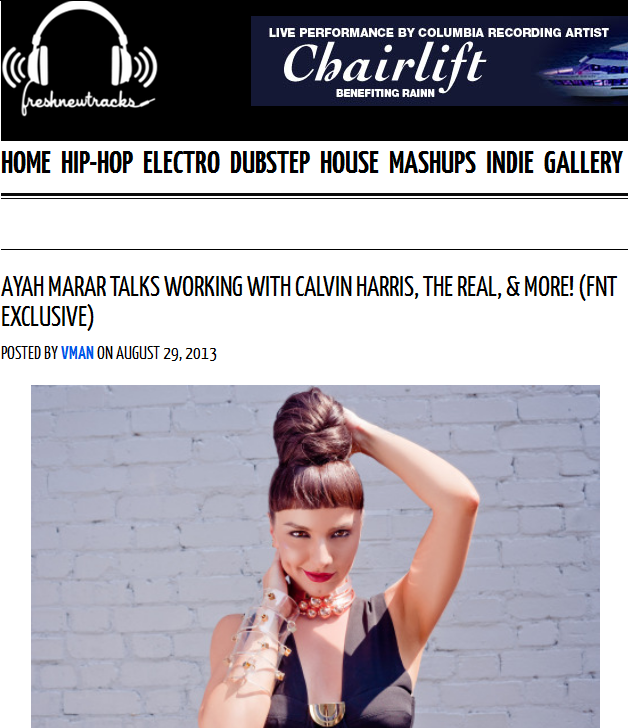 In this Fresh New Tracks exclusive, Ayah talks about working with Calvin Harris, her debut album The Real, her past, and a lot more. In case you were wondering, Ayah likes to describe her music as “Epic Doom Pop” and we are perfectly content with this. Have a look at the interview below, and check out the original post here.

FNT: How would you describe your music?

Ayah Marar: Epic doom pop, I don’t know where that came from, that was actually an interviewer who said “It’s not really pop what you do, but it’s kind of dark as well, and it’s kind of epic” and we were like ooh Epic doom pop, so I’m going to stick with that, I think that’s the new phrasing

FNT: What was your first experience with music, and how did you get started?

AM: I started out playing the piano, I got my grand A when I was 16, and I was a ballet dancer for about 10 years, so it’s always been around in some shape or form

FNT: When did you know that you wanted to do music for a living?

AM: My whole life, always, I’ve always known I’ve wanted to do something with music but for a living probably when I was 17 or 18 when I moved to England and started running drum and bass night, and then a record label, and then a record shop, and then I was a drum n bass MC for a while and then I started to write records with other people, for other people, and for myself, but I’ve always known I wanted to do something with music, in one way or another.

FNT: When you were 17, you moved from Jordan to the UK, was that a difficult decision to make?

AM: Not really, no, it made sense to me because as much as I loved to live in the Middle East, and I’m not sure London is the place where I’m going to stay, I feel there are many chapters, and many places that I have to be in my life, and London is one of them, but it seemed to work out for what I wanted to do then, and now… but it wasn’t hard, it felt right.

FNT: How were the first few years in a new country?

AM: A bit of a blur…hahaha. they were awesome, because I met all the people that I love, my family, I fell in love with the music I make today, they were probably the best years of my life, and still are I suppose… but it becomes harder when you have more vested interests, and you have to make a living out of it, as opposed to just doing it… on the back of a car, or someone’s floor or someone’s sofa.. it’s real!

FNT: And you met Calvin Harris in those early years?

AM: Uptown records, he was 17, 18 and I was in my early 20?s and he came in with a demo, and it had scribbles all over it, and it has his name and email address, and he just gave me this CD, as many people did, I don’t know if people do it anymore, but people used to come in to record shops with their demo to give to x y z radio presenter and I put it on as he left, and I said this is awesome, and I emailed him and he said “I need a place to stay” and I said “where are you”, he said “I’m in Scotland,” I said well I’ve got a room, so he came to live with me for a while, and we’ve been friends ever since…

FNT: And you’re featured on his track “Thinking About You” which is on his double platinum album “18 Months,” that must’ve been exciting, what was it like working with him on that song?

AM: That was the 10th anniversary of us knowing each other actually, writing that song together, and it was easy.It was so easy, so much fun. He likes to do stuff on his own, so he was just in his own studio, and we just sat there and it was a sunny day, and we locked ourselves away and it took us 3-4 hours, and we had the track, and yeah it just felt right

FNT: Any potential plans of working with Calvin in the future?

AM: Absolutely,yeah, 100%, I think we’re going to do some more writing as soon as all of this dies down for him, and see what happens, but yeah we’re definitely in the long run together.

FNT: What’s your own song writing process like, and how did you go about writing the songs on your debut album “The Real” ?

AM: Naughty boys, they’re so naughty, boys…that’s why I wrote these songs, cause boys upset you one way or another and then you just end up writing songs about them, and that’s what happens… either they’ve been about myself and my experiences, or experiences that I’ve watched other people go through, like they’re all related to love one way or another cause let’s face it that’s what we all have in common, whether it’s hate or love… it’s a sensationalized autobiography really the album, just building on my experiences and those of others…

FNT: How do you write your songs?

AM: Pen and paper, usually I’ll have a beat, someone ‘ll send me a beat, and I’ll write to that. but with the album Will Sims and I built most of the tracks from scratch together, so we sat in the studio and I’d say to him ” oh i love the beat on this track” or “I love the top line on this track” or whatever it is, and we’d just sit and listen to stuff, but now a days I just jot things all the time, so if I have a lyric idea or chorus idea, I’ll just write it down, and then I’ll go to someone, and go “Hey I wanna write a track about this” and they help me build it.. And I’m trying to learn to produce as well, I don’t want to be a jack of all trades, but I like the idea of being able to just do it all yourself, which is what I’m trying to do with everything else…

FNT: When you’re performing live what’s your favorite song to perform off of the album?

AM: I don’t know, it’s like making me choose a favorite child… I really enjoy performing the drum n bass songs cause that’s kind of closest to my roots and I’ve got Illaman with me and Tenku on the decks and it just reminds me of going out raving, so I suppose the drum n bass tracks are my favorite ones to perform 100%

FNT: You’ve toured in different parts of the world, what’s the biggest difference between crowds in the different countries that you’ve played?

AM: Some crowds are alot more excitable than others, and it depends if you’re performing to people who are out to see you, or are out to see other people, if it’s a festival and they don’t know who you are sometimes it’s harder to win people over, but the thing with us is that we always seem to get them in the end, so it takes us a couple of tracks, but by the end of it the effect seems to be the same wherever we go, usually a mosh pit, which is cool, it doesn’t really happen in dance music, but we seem to be starting a lot of those recently, and I don’t know who’s fault that is, if that’s my fault, Illaman’s fault, it’s one of our faults, but they all seem to get the same reaction in the end, but it takes a while to pummel them into submission…

FNT: You prefer the more intimate underground kind of shows, or do you like the big festivals?

AM: We’ve been doing a lot of festivals recently, so I’m preferring that, I’m preferring the whole vibe of it, cause you can go for wonder, have a few drinks, then have some food, and the you get to see the whole culture and stuff like that, I’ve been enjoying that a lot, I feel like we’ve done the club scene for the last few years, so festivals is where it’s at me for me right now..

FNT: Was it challenging for you to gain some acceptance in a mostly male dominant EDM scene?

FNT: What would be one piece advice that you would give to artists coming up in the EDM scene?

FNT: The UK has been a huge birthing hub for many electronic artists, are there any up and coming artists that you’re aware of, and that you’re into?

AM: A couple of them I’ve worked with already, people like Metrik, Camo & Crooked, Netsky, Zomboy, Fun Case, Predator, P Money I think is wonderful and the Echo… So many grime artists and underground producers that are coming through, and they all seem to have the same aim, and it’s like no one really is worried about what anyone else is doing, everyone’s kind of focused on their own paths, and I think that’s what makes UK artists stand out…

Very good product and the price is right. Buy viagra? The difference between a brand name medicine and a generic one is in the name, shape and in the price.