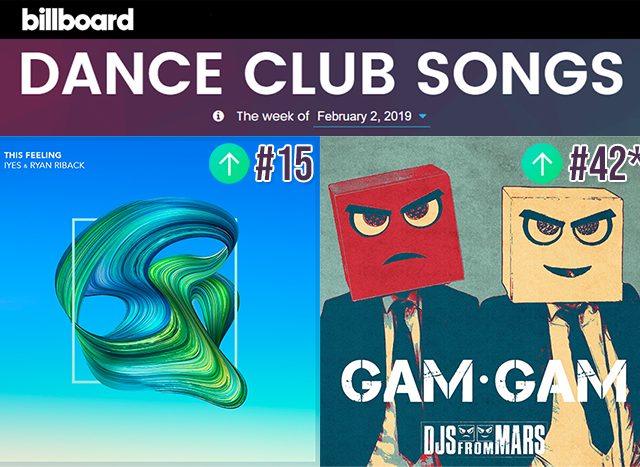 Two Radikal Records releases are currently climbing the Billboard Dance Club Chart for the week of February 2nd, 2019. After 4 weeks on the chart, “This Feeling” the collaborative single from songwriting duo, IYES and DJ/Producer, Ryan Riback has hit a new peak position at #15. Martian duo DJs From Mars also entered the chart with “Gam Gam,” the week’s ‘Highest Ranking Debut’ at #42. 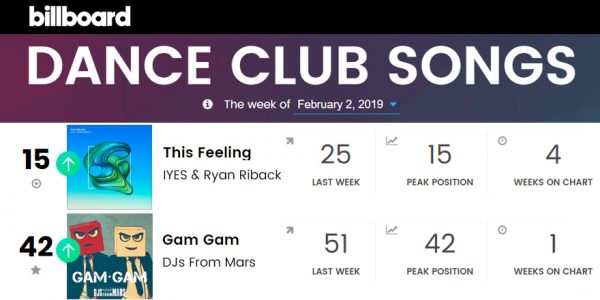 Click for the Billboard Dance Club Songs Chart for the week of February 2nd.

Berlin-based songwriting duo, IYES and rising platinum-selling DJ and producer, Ryan Riback have joined forces to unleash their pop smash, “This Feeling”. Quickly garnering over 1.2 million streams on Spotify upon its release, the infectious dance-pop single is now available in North America via Radikal Records.

The single was followed up with the release of ‘This Feeling (Remixes)’ with new mixes and extended cuts provided by producers Teo Mandrelli, Jared Martson, MC4D, and Panny DJ. This Friday, February 1st Radikal is set to release a brand new remix of the pop smash from Grammy nominated producer, StoneBridge and longtime production partner Damien Hall. Click Here to pre-order their mix on iTunes.