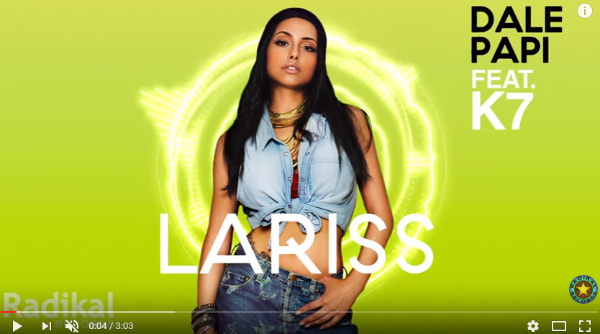 Last week, one of Europe’s hottest artists Lariss release her brand new US mix of her chart-topping single “Dale Papi” in North America. For her US debut the stunning and super-talented Lariss is teaming up with iconic US Hip-Hop artist K7, best known for his Hit single “Come Baby Come” which reached #18 on the Billboard Hot 100 and #3 on the UK Singles Chart, to add a fresh new touch on her hot Latin single. “Dale Papi” is the perfect song for the summer, mixing elements of Latin Pop, Hip-Hop, and Electronic Dance Music. The single is sure to be heating up dance floors all summer long.

Lariss’ hot music video for her Single became an overnight viral sensation on YouTube around the world. The “Dale Papi” video was directed by Khaled Mokhtar, best known for his work with international Hit artists including Alexandra Stan (“Cherry Pop”), Inna (“Be My Lover”), and Antonia (“Marabou”), has generated more than fifty-four million views on YouTube to date. Watch the music video below: