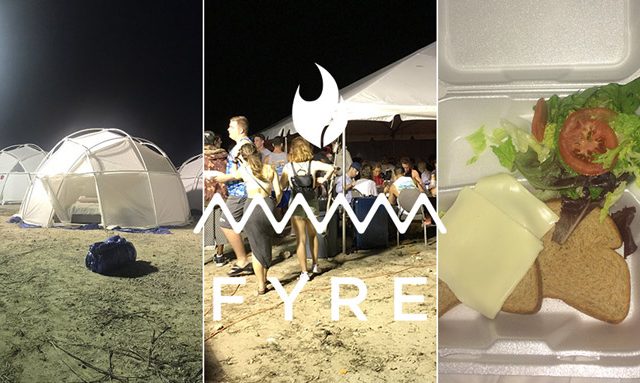 We Still Can’t Get Enough of Fyre Festival

By now you’ve definitely heard all about Fyre Festival by now. You’ve seen the countless shared pictures, videos, and horror stories from those fortunate enough to even purchase a ticket to the infamous Fyre Festival in the first place.  What started off as an exciting new VIP music festival experience marketed towards elite millennials quickly turned into a disaster before the event even started. Various celebrities like Kendall Jenner and Bella Hadid promoted the event on Instagram, quickly reeling thousands of festival-goers in to pay anywhere from $4,000 to $12,000 for a ticket.

The experience promised things like a flight to the private island, luxury cabanas to stay in, and gourmet catered food all while listening to world-famous acts in the Bahamas. In reality, attendees got absolutely nothing that they were promised. As far as refunds go, ticket holders could choose to either get a full refund or VIP tickets to next year’s Fyre Festival.

On Sunday, Daniel Jung filed a lawsuit after attending the festival which seeks upwards of $100 million dollars in damages on behalf of himself and everyone else that attended. The accusations towards the Defendants (or the festival organizers) range from having no accommodations or food service, proceeding to promote the festival even when they knew they wouldn’t be able to put it on, and false imprisonment. Co-Founders Billy McFarland and Ja Rule have issued both apologies and responses on social media, along with various promoters.

Props to #Entertainment720 for their work on #fyrefestival pic.twitter.com/tOMpXmLhAL

So TGIF & enjoy your low wage jobs today because at least you didn’t pay $5k+ to be at lord of the flies train wreck that is #fyrefestival pic.twitter.com/YWtrKaqxL8

As compensation for any ill will caused by #fyrefestival
Official Staff has announced all attendees will get an extra hour in the ballpit. pic.twitter.com/Us58auYPSB