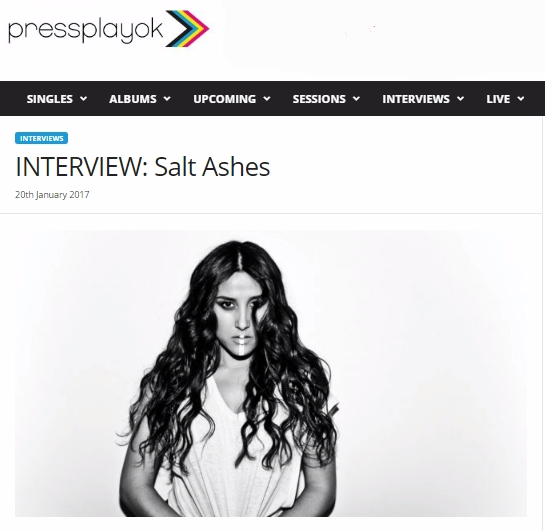 Emerging electronic singer-songwriter Salt Ashes is celebrating the release of her music video for the lead single, “Save It,” from her self-titled debut album. In the midst of the celebrating the release, Salt Ashes caught up with music blog PressPLAY OK for an exclusive interview where she discusses her debut album, the “Save It” music video, and much more. Check out some of the exclusive interview below, but be sure to head over to pressplayok.com for more.

Sometimes it’s the under-radar talents that give you the best tunes. That’s certainly the case with Veiga Sanchez aka Salt Ashes, who seemed to have a knack for making brilliant floor-filling jams the moment she came out of the pop womb. Now with an album packed full of said cuts, we catch up with the lady behind the confident stage persona and find out more about her journey…

How would you describe the Salt Ashes mission statement (if there is one)?

I’ve never thought about it until now but I would say… To evoke emotion, inspire sexuality, ignite individuality and most of all… DANCE.

Tell us a bit more about bout the album. We’re big fans, so we’re keen to know more about the thought process behind it.

I actually wrote the album over the space of about 4 or 5 years so was just writing whatever came out at a leisurely pace. It’s a little insight into my life around that time and everything that I was feeling and going through. The message is for the listeners to decide.

We’ve got your lovely new video here. What was the idea behind that?

I wanted to create something dark, artistic and abstract but still maintaining the main emotions and sentiments – passion, tension, rebellion, sexuality. I wanted to contrast some kind of ritual like vibe with unbinding passion and rebellion.

There’s quite a lot of female-driven pop out there. Does it ever feel intimidating? Who do you look at as competition / inspiration?

I find it empowering. It’s difficult to be a woman in this industry and be able to express yourself in the way that you want to without being judged or sexualised in some way or another. Artists like Madonna, FKA twigs, PJ Harvey, Bjork, MØ, M.I.A are always inspirational to me for their strength, courage and individuality. There’s so much conformity, striving to be what media advertises as ‘perfect’ or ‘beautiful’ that it’s comforting to witness artists like these females who do whatever the fuck they like and never follow what’s fashionable at the time.

Final question that we ask everyone: favourite Beyonce song?
Freedom.