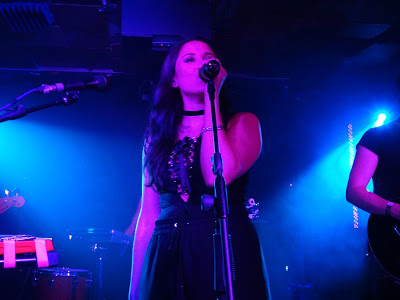 Music blog Jumpin-Sounds met up with the electronic/pop artist Salt Ashes at her album launch party earlier this week. Still hot and sweaty from this high energy performance, Jumpin-Sounds talks about the dance heavy set, and catches an exclusive interview with Salt Ashes. Backed by her 3 piece band (Jonny Coote – Guitar, Cheryl Pinero – Bass, Jason Mallet – Drums/Keys) SALT ASHES took to centre stage delivering a performance that left the audience on a high. After the electrifying 11 song set, Salt Ashes caught her breath to talk about the new album and answer a few questions for Jumpin-Sounds. Check out some of the exclusive interview below, and be sure to head over to Jumpin-Sounds.com for the full interview.

Tell us a little about your musical history and how you got started?

It took me a while to discover the style in which I’m writing in now.. I had to experiment quite a bit before I found myself in electronic/pop.. I was writing pop/rock music and feeling uncomfortable performing it so I took some time out and played around with logic and started using my voice differently. That was when I found the style I felt more comfortable in so I began working with my producer, Daniel Fridholm, and that when the magic happened.

So your debut album has finally arrived and it’s fabulous. Tell us a little bit about the whole process of making it?

The album was created over a long period of time in dribs and drabs which was actually less pressure than if we’d gone into a studio for 6 months. I’d usually write and roughly demo a track, then send it onto my producer to put his magic on it and we’d then work together from there to get it to the level we wanted. Maybe 3 weeks would pass and then we’d do another track. There was no budget at the time for making this album so that was the most cost effective way that we could do it really as well as both myself and the producer juggling other jobs.

Do you have any favourite tracks?

One of my favourite tracks is ‘Whatever You Want Me To Be’. I think the production is awesome and I love how the tension is built throughout the track.. It really takes you on a journey… Or at least it does to me.

Now that the album is out there, what can we expect next? More music and gigs planned?

I’m hoping there will be more live shows and festivals next year as well as more music.. always!

For more from this exclusive interview, visit: Jumpin-Sounds.com

“Salt Ashes” is now available for purchase in record stores nationwide, onAmazon, iTunes,Bandcamp, Google Play, and in the Radikal Records web-store. It is also available for streaming on Spotify.