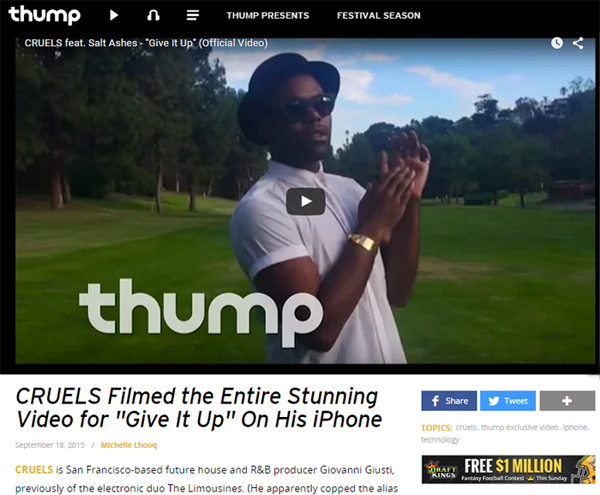 THUMP Premieres Music Video for CRUELS “Give It Up” feat. Salt Ashes

Fresh off her feature on Kristian Nairn‘s latest Radikal Records single, “4Love,” Salt Ashes is gaining even more traction with the THUMP music video premiere for, “Give It Up”, her recent collaboration with San Francisco-based producer, CRUELS.

Impressively, CRUELS filmed the entire music video on his iPhone and edited it together on the iMovie app on his phone. The subjects of the video are all the friends and family of CRUELS, with the footage being shot in San Francisco, Los Angeles, and Tuscany.

“I’ve been collecting iPhone footage of friends in symmetrical environments since Slo-mo was first released with the 5s. I wanted to tie together the visual collage of the material I was collecting, with no relation of each scene besides the style of filming. …The goal was to make something representative of my music and also cinematic and fashion-forward, using an everyday consumer device and apps.” – CRUELS

Hearing the alluring voice of Salt Ashes while watching only adds to the simplistic beauty of the video.

Click Here to check out the full feature for “Give It Up” on THUMP.

Salt Ashes latest single, “Raided” recently won mtvU’s ‘The Freshmen’ and is available for purchase iTunes, Beatport, and Bandcamp. You can also check out her collaboration with label mate, Kristian Nairn on, “4Love” on iTunes, Beatport, or Bandcamp.