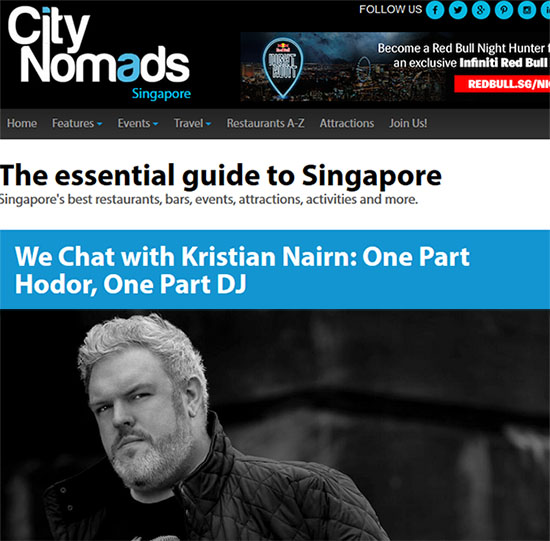 Kristian Nairn, who is most recognized as the lovable Hodor on HBO‘s hit series Game of Thrones,  recently spoke with City Nomads, Singpore’s essential guide to all things Singapore, about his debut single “Up/Beacon (featuring Leanne Robinson),” his Rave of Thrones tour, and much more. You can read some of Nairn’s exclusive interview below, but head over to CityNomads.com to read the full interview.

What inspired you to pick up DJ-ing?
I was always an enthusiastic club goer, and I had a huge music collection. I wanted to share how I felt about music with other people, and hopefully they would feel the same.

What’s the most fulfilling, and challenging thing about being a musician?
There are a LOT of challenges in the music industry. I won’t go into all of them here, but I think one is to make yourself stand out as an artist. DJ’s are two a penny these days, so it’s more important than ever to be true to your music and yourself. I don’t necessarily follow current music trends, but I do think it’s important to be aware of them and maybe give a nod towards them.

We hear that you’re a pretty good guitarist as well, could you name us your top 5 shred-able jams?
OK, let me see. Megadeth’s Hangar 18 is a shredfest; Highwire by Badlands; Bark at the Moon by Ozzy Osbourne. Joe Satriani’s Surfing with the Alien and Nuclear Assault’s Something Wicked.

Who would be the craziest in a GOT cast party with you as the DJ? We’re putting our money on either Peter Dinklage, Alfie Ellen, and Emilia Clarke.
I don’t know, but I’ve seen Finn Jones (Ser Loras Tyrell) and Gwen Christie (Brienne of Tarth) work a dance floor before while I was DJ-ing at a club!

“Up/Beacon (featuring Leanne Robinson),” is available now on Radikal Record via iTunes, as well as stream it on Spotify, Beatport and Bandcamp. Also, you can now listen to Nairn’s July mix on Soundcloud.