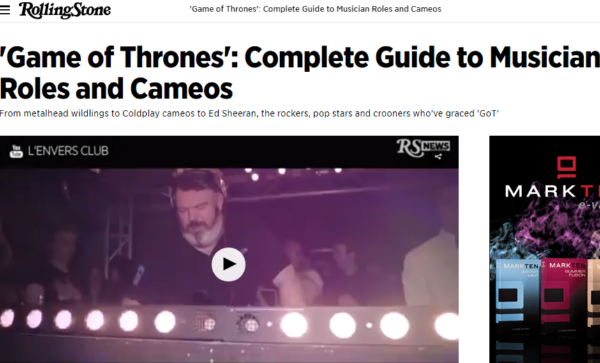 Kristian Nairn is a renowned DJ worldwide. He is most recognized for his portrayl of the lovable and loyal Hodor in HBO‘s hit series Game of Thrones. Nairn is not the only musician to be featured on the hit show, but he is of course of favorite! Rolling Stone has complied a complete guide to musician roles and cameos in the series. You may not have even recognized some of your favorite musicians. Check out some of the list below, but visit RollingStone.com for more!

Kristian “Hodor” Nairn has a lengthy career as a guitarist and DJ. The Hold Steady’s version of the popular-in-Westeros song “The Bear and the Maiden Fair” appears in the Season Four episode “Walk of Punishment.” And Alfie Allen, who plays everyone’s favorite humbled eunuch Theon Greyjoy, is the brother of pop star Lily Allen.

But the show has gone beyond that, casting actual recording artists as regular cast members or occasional superfan guests for the benefit of eagle-eyed music fans. With season seven now finally underway, here’s a look at the show’s famous rock-star cameos, metalhead wildlings and musician-played recurring roles.

Have you been dying to attend one of DJ Kristian Nairn‘s DJ Sets or ‘Rave of Thrones‘? Well you’re in luck! The renowned DJ will be bringing his DJ set and ‘Rave of Thrones’ to the United States beginning on July 19, 2017 in San Francisco. Nairn has multiple dates spanning from July to September. Spots include San Francisco, Los Angeles, Las Vegas, Brooklyn, Philadelphia, and more!  Head over to KristianNairn.com to find a date near you.