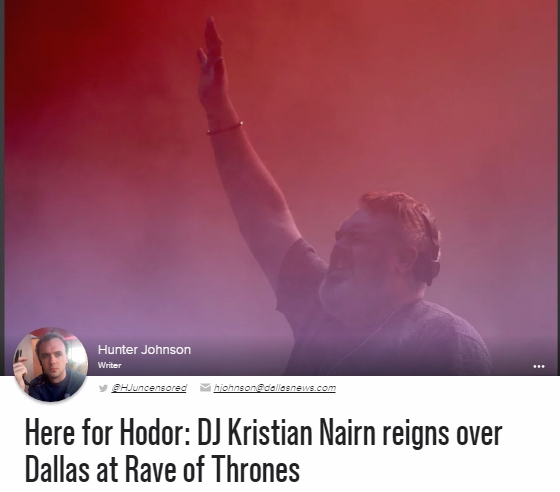 This past Saturday (August 13th), Kristian Nairn, most commonly recognized as Hodor from HBO‘s hit series Game of Thrones,  brought his ‘Rave of Thrones’ to Dallas, Texas at The Bomb Factory. Fans gathered from near and far to catch a glimpse of not only one of their favorite Game of Thrones actors, but favorite DJ as well. If you couldn’t make it to The Bomb Factory, don’t worry Guide Live was there to capture all the fun. Check out some highlights of the night below, but be sure to head over to GuidLive.com to read the full article.

Saturday’s Rave of Thrones, an EDM and light show at the Bomb Factory featuring Game of Thrones actor/DJ Kristian Nairn as the headliner, brought out a diverse crowd of regular ravers and cosplay-loving fans. Still, there was no question why almost everyone was there: They wanted to see the man known and loved worldwide as Hodor.

It was okay that a lot of the crowd, including myself, wasn’t overly into the music itself. Every time he played a long, ear-piercing build up that led to a massive bass drop, we all dropped with it. When he held his hands up and made a heart, we all returned it with shouts and cheers. When he waved goodbye, telling us he’d never forget this night and giving us a final “Hodor,” we all went wild.

Nairn is a professional DJ — this, not acting, is his real job — but for the Bomb Factory audience, the music almost didn’t matter. Of the couple thousand people in the crowd, most came to see the man they knew as Hodor. With a personality as sweet as his character’s, and all the energy he threw into his performance, that was more than enough for a good time.

In 2015, Kristian Nairn released Up / Beacon (feat. Leanne Robinson) and 4Love (feat. Salt Ashes), both of which received rave reviews worldwide! Both singles are now available for download on iTunes & Beatport, and for streaming on Spotify & SoundCloud. For a full list of Rave of Thrones tour dates visit RaveofThrones.com