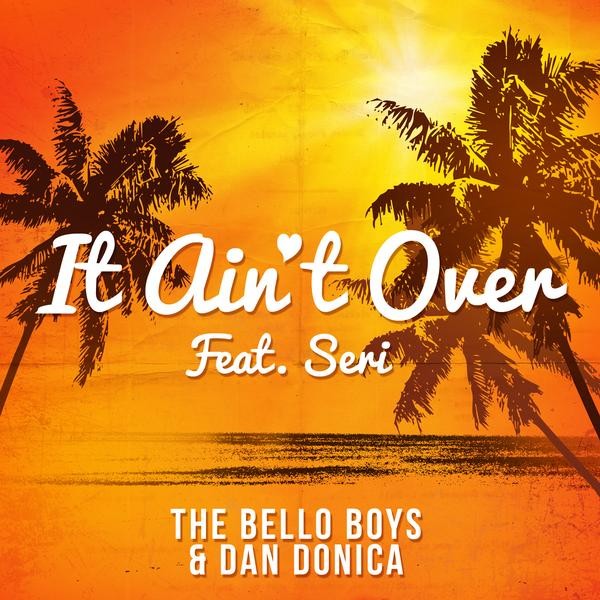 The Bello Boys are back at it again! This time the enlisted the help of Dan Donica for their irresistible new single “It Ain’t Over,” which features the powerful vocals from singer-songwriter SERI. This catchy new summer anthem is the follow-up to their 2014 single “Last Call ft.Kat Deluna“, which charted on the Billboard Dance Club Chart. This hot new single is available for digital purchase and streaming. The single is accompanied by a set of mixes from remixers including Funky Junction and JKGD.

The Bello Boys made up for Ted Bello, KC Anderson, and Sean “Hollywood” Hamilton, a team of DJ producers from New Jersey/ New York City. Ted Bello is an accomplished guitar bass player, producer. He’s toured playing bass all over the world. KC Anderson is a professional seasoned DJ with his career spanning hot spot nightclubs, dance radio – both as mix show DJ and on-Air personality, and chart-topping productions on Traxsource, Beatport and Billboard. Sean “Hollywood” Hamilton hosts “Hollywood Hamilton’s Remix Top 30,” where he counts down the 30 biggest songs of the week. He is currently nominated for 2016 Radio Hall of Fame.

Dan Donica is a DJ producer and musician who studied piano and composition at the Conservatorio Arrigo Boito in Parma. He has an unique sound and focuses on House music with some influences from Deep House. SERI is Billboard EDM recording, performing artist, songwriter. Her singles include “Love Rain Down” with Markus Schulz, “Ready To Fall” with 4 Strings, “Gave Me” with Giuseppe Ottaviani. Now, she lends her powerful vocals on this dance anthem of the summer!

The Bello Boys and Dan Donica’s new single “It Ain’t Over (feat. SERI)” is now for digital purchase and streaming. Purchase the single on iTunes, Bandcamp and Beatport. Stream the single on SoundCloud or Spotify.