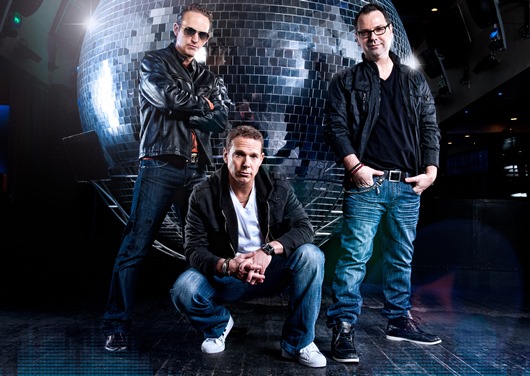 TIM BELLO aka: HOLLYWOOD HAMILTON – Tim Bello started his career as a DJ and has played clubs all over the world. He’s one of the most recognizable names in radio from coast-to-coast. On air at three of America’s biggest radio stations has made him a broadcasting icon. Z-100/NYC, KIISFM/LA, now back again in NYC/WKTU. The WTop30 & RT30 are syndicated on 280 affiliates, 11 countries.

In 1998 Sean “Hollywood” Hamilton went national and HOLLYWOOD HAMILTON’S WEEKEND TOP 30 was established in conjunction with PREMIERE RADIO NETWORKS. In one year, the show became the fasted growing syndicated program in America, and was the “Nationally Syndicated Radio show of the Year” in 2000 by Radio & Records Magazine.

Today HOLLYWOOD HAMILTON’S REMIX TOP30, a dance EDM style show is listened to by approximately 5.7 million people every weekend. He Count’s down the 30 biggest songs of the week all remixed by some of the biggest EDM producers in the world. Plus the biggest celebrities in the business join him, either in-studio or backstage. The show is heard in over 100 cities throughout America and around the world and is offered in two different formats, a Pop/Mainstream version and Hip Hop as well. The Remix Top30 with WKTU in New York being its flagship station.

TED BELLO – Ted is an accomplished guitar bass player, producer. He’s toured playing bass all over the world but remains a mystery and does not talk about himself.

KC ANDERSON – Born and raised in New York. KC Anderson’s career as a DJ began on the radio airwaves in 1998 on Party 105.3 in Long Island, NY. It was here in his own hometown where KC honed his talents as an On-Air DJ personality as well as Mixshow DJ. From there he became Director of Promotions at Nervous Records breaking several 1 dance records such as Widelife’s ‘I Don’t Want You’, Pepper Mashay’s “Dive In The Pool” and Jessica Folker’s “To Be Able To Love”. Over the years he would play NYC clubs. as well as spin summers in the Hampton’s. One of the highlights inKC’s DJ career was in 2002 where he was chosen to spin in London at the Ministry of Sound for the Nervous Records 10 Year Reunion Party. “It was a special night for me,” he explains, “to be at the Ministry of Sound DJing for thousands of people, alongside DJs I admire such as Tony Humphreys, and Bobby & Steve from Soul Heaven.”

As a staple in NYC nightlife, KC is an advocate for DJs and quality dance music. His presence and understanding of the dance music community still contribute to his success to this day. His mixshow, KC’ s Velvet Lounge on New York’s 103.5 WKTU had a run of 4 years playing the sexiest soulful deep house sets every week. He has had two CDs released ‘The Soulful House Experience’ (Nervous Records) and ‘Destination Lounge – NYC’ (UBL Music). As a DJ, KC’s style derives from the essence of the old school DJs where House music was all styles combined – classic disco, funk and soul. Whether DJing at a trendy lounge or pumping Main Room, KC sets the night with a perfect combination of deep vocal house and main room anthems.” It is this exact style that has led KC to provide the perfect vibe in lounges and clubs all over. (Miami and Ibiza) 2009 brings a new chapter to his DJ career as he becomes resident DJ for worldwide record label Hed Kandi with club appearances slated for Vancouver, Miami, Las Vegas, Mexico, Ibiza, Toronto and New York.

In 2013 he joined dl/production team The Bello Boys, producing and remixing for several major dance and mainstream pop artists.