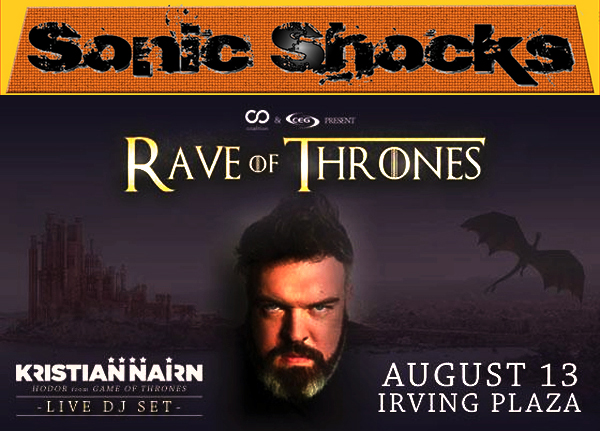 Kristian Nairn may be best known for his portrayal of Hodor on the HBO series Game of Thrones, but he has been a strong figure in the music scene for more than 20 years. Nairn has been creating quite the buzz in the media with the recent release of his debut single “Up/Beacon (featuring Leanne Robinson).“ Sonic Shocks recently interviewed the DJ/producer, in which they discussed everything from how he got into the music business, his ‘Rave of Thrones‘ tour, and his debut single on Radikal Records. You can read some of the interview; be sure to visit sonicshocks.tumblr.com to read the full  interview.

What led to your career  as a DJ? How did it all begin?
It began by learning to DJ while at Music College, and having a huge music collection. A DJ called in sick to a bar I was working at, and I offered to cover. I haven’t stopped DJing since than…20 years ago. Before that, I was a big fan of the house/trance scene and definitely spent most of my weekends partying to the music I loved.

How did you come about creating your ‘Rave of Thrones’ theme parties? What was your motivation?
I wanted to create a vibe that reminded me of old school clubbing. Recipe of all walks of life coming together and letting down their barriers. The costumes and share interest really helps with that. It can be a very special atmosphere, and it makes me very happy when it all comes together.

You will be performing your ‘Rave of Thrones’ at NYC’s Irving Plaza on Thursday, Agusut 13th where guest are asked to wear themed fancy dress, with those ignoring the dictum allegedly risking the wrath of the Hang of the king. First of all, what kid of fancy dress do you expect to see?
I imagine there will be a lot of Daenerys, Joffrey, Jon Snow and Cersei…and maybe a few white walkers. Those are definitely the favourites.

You have recently released your debut single ‘Up/Beacon’ (feat Leanne Robinson), how is it going so far?
It’s going far better than i hoped and imagined. It’s had a LOT of interest on SoundCloud and beyond. I couldn’t be more excited to see where this going to lead.

Any last word/shouts before I let you go back to your realm?
Just Thank you for all the support that’s been shown for the tracks so far, I can’t tell you how much it means.

Nairn’s debut single “Up/Beacon (featuring Leanne Robinson)” is available now on iTunes, as well as stream it on Spotify, Beatport and Bandcamp.