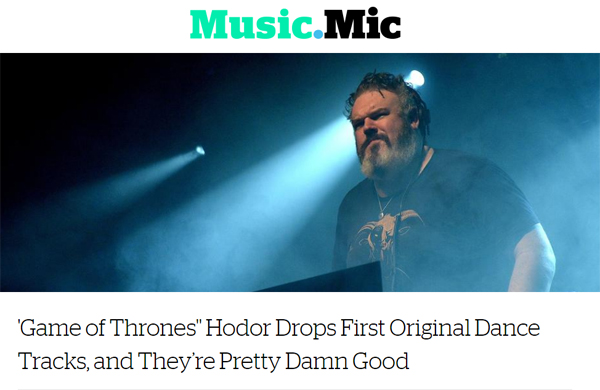 Kristian Nairn Has Been Featured on Mic.com

Following the release, and rising popularity, of “Up/Beacon“, Kristian Nairn‘s tracks are being described as “pretty damn good” in the music section of Mic.com! The EDM icon is also known for his lovable role as Hodor in HBO’s Game of Thrones. Take a look at what Mic.com has to say:

Nairn is no newcomer to the EDM scene. He’s been DJing for 20 years, and he also plays guitar and sings. For 11 years, he’s held down a residency at the Kremlin, a famed Irish club. He’s performed alongside the Scissor Sisters, Calvin Harris and Alphabeat. His role on Game of Thrones has only increased his visibility, and Nairn has been relishing every bit of it.

Nairn recently wrapped up a three-month Rave of Thrones tour, apparently a wild, cosplay-heavy affair. Wired described Nairn’s set as “progressive house,” with a few dialogue samples of his character and one chiptune variation of the Game of Thrones title theme mixed in, “but mostly he’s just lost in the trance of a continually pulsating rhythm.”

Want to read more of the article? Check out Nairn’s feature in Mic.com.

Don’t forget that “Up / Beacon (feat. Leanne Robinson)” is currently available for digital purchase and streaming worldwide. Nairn’s debut single “Up/Beacon” is available now on iTunes, as well as stream it on Spotify, Beatport and Bandcamp.