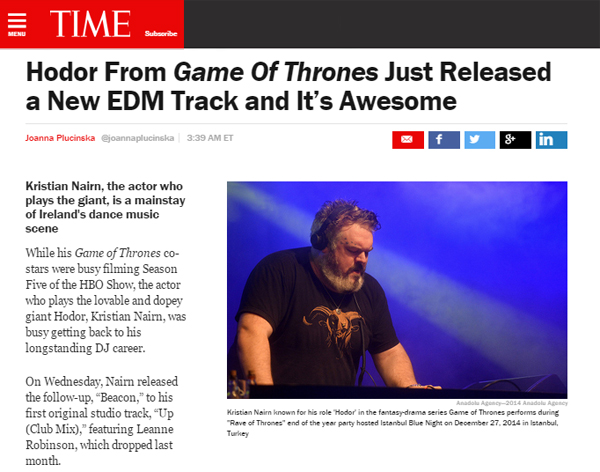 Widely known for his acting, and now his music, Kristian Nairn’s EDM debut titled “Up/Beacon” has been receiving a swarm of positive media attention. And now the lovable Game of Thrones actor is featured on TIME! Take a look and see what they have to say:

His Game of Thrones fame has only helped his music. Most recently, he completed a well-reviewed North American and European cosplay-heavy dance tour appropriately titled Rave of Thrones.”

Don’t forget to read the rest of Kristian Nairn’s feature on TIME.

“Up / Beacon (feat. Leanne Robinson)” is currently available for digital purchase and streaming worldwide. Nairn’s debut single “Up/Beacon” is available now on iTunes, as well as stream it on Spotify, Beatport and Bandcamp.