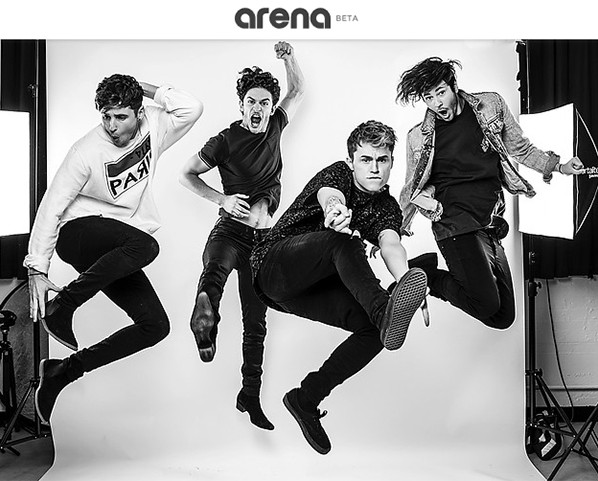 Fresh off the release of their debut album, We Are The Young, Kingsland Road did an exclusive interview with Arena.com, in which they discussed the vixen(s) behind their first single “Dirty Dancer,” their go-to karaoke songs, and much more. You can read parts of the interview below. To read the full interview make sure you head over to Arena.com.

Matt: Amazing! When we started Kingsland Road, the dream was always to go to America and gig. It’s very flattering that someone in the U.S.A. had the confidence in our abilities and in our music, which is always nice. So we want to say a huge thank you to Radikal Records because this wouldn’t be happening now if it wasn’t for them!

Arena: I heard the single “Dirty Dancer,” and I must know … what inspired this song? Who is this dirty dancing vixen you speak of?

JJ: Matt is the dancer of the group and he is so bad we named him the dirty dancer. He makes the dance floor a mess when he hits it! (Laughs) I joke. “Dirty Dancer” is about a night out we had with a certain little band called Little Mix. We just stood with our jaws to the floor. They’re the dancers we are singing about.

Arena: Something I wanted to point out is you all co-wrote the tracks on . That is extremely rare, especially for new boy bands. In fact, I think the only so-called boy band who wrote or co-wrote their entire first album, to my knowledge, was back in 1999. That said, how important was it for you guys to showcase the songwriting skills on this record and do you feel by doing this that it’s a nod to your talent and artistry?

JJ: The music is the most important thing to us. We really believe in it and we feel really comfortable in the studio. It’s the biggest buzz writing something and having people like it. I believe it’s important to show your own artistry so people can see you for who you are and hear the truth in it, rather than singing someone else’s song — unless you really like it and can relate to it. But we were really lucky to work with some incredible producers. Even Josh Devine, who is One Direction‘s drummer, got involved with the project, which is awesome. He is such a nice guy as well!

Arena: Ok, so last question: Kingsland Road has covered a lot of songs, like “Burn,” “All Of Me,” and “Photograph,” among many others. So say you’re at a karaoke bar, what is your go-to song because it seems like you all have quite a few choices.

We Are The Young, is available for purchase on iTunes, Amazon, and the Radikal Records web-store. It is also available for streaming on Spotify and Bandcamp. Keep up to date with Kingsland Road on Twitter, Instagram, and Facebook and make sure you subscribe to their YouTube Channel to see their latest videos.