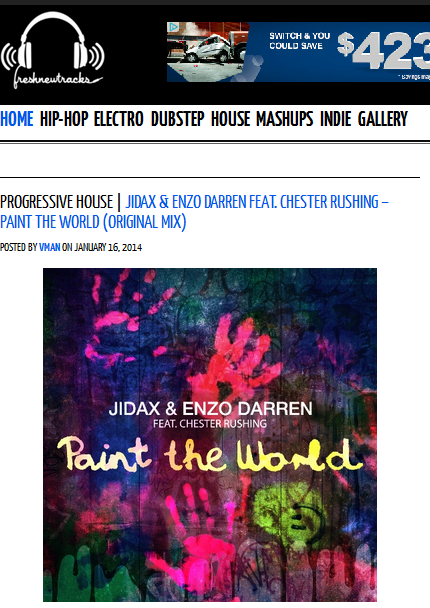 FreshNewTracks.com featured Jidax, Enzo Darren and Chester Rushing’s latest release “Paint The World” and here’s what they had to say about it:

French DJs and producers Jidax teamed up with Enzo Darren and US vocalist Chester Rushing to drop “Paint The World,” a progressive house gem premiered on Tiesto’s Club Life podcast a few months back, and officially released in the US this week via Radikal Records, along with remixes by Lush & Simon and Dirty Rush & Gregor Es. If you’ve been looking for a follow up to Swedish House Mafia ever since they broke up, “Paint The World” is just that: epic vocals, a powerful production, and a positive message. This is a must listen and a must download, I guarantee it!

Stream the remix package below, and purchase the single on iTunes and Beatport.