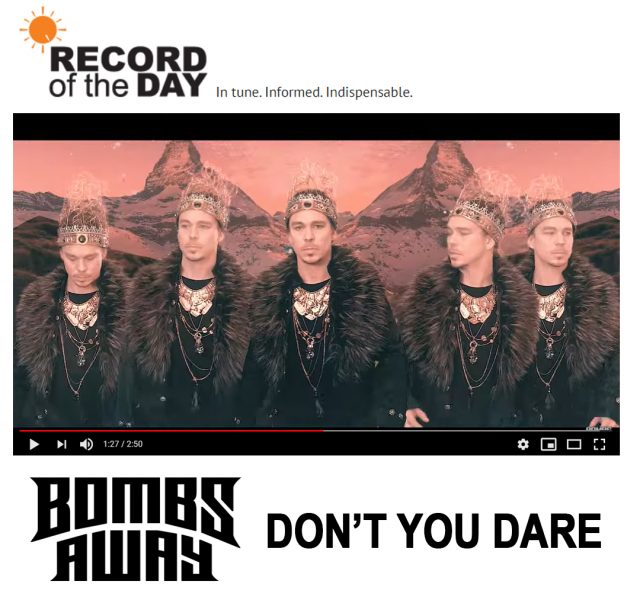 After over 10 years of touring all corners of the globe as the party-starting duo Bombs Away, 2021 sees Sketch hanging up his headphones, handing Tommy the reins and full control to take Bombs Away to a whole new level. Tommy is starting this new solo chapter with a bang with the recently released, “Don’t You Dare”.

The new single is featured today on Record of the Day, who state the track is “full of heavy electro and slap house vibes with an emotional and addictive hook,” making for an “explosive and energetic return” from Bombs Away.

Accompanying the single is a music video directed and entirely produced by Tommy himself. “Don’t You Dare” shows a new side to the Bombs Away sound and perfectly follows up their 2021 singles “Love Magic” and “In My Head”.

“I’m really excited to show our fans what’s next for Bombs Away. I’ve got so many projects, singles, videos, and ideas everywhere and I just can’t wait to start this next chapter.” – Tommy

There is no slowing down for the multi-platinum, ARIA-nominated Bombs Away. Their new live show will see Tommy delivering more energy and interaction with exclusive custom remixes, hype vocals and insane stage presence, intertwining club classics with pop culture references, whilst continuing to build on the unforgettable Bombs Away experience that fans have come to know and love over the years.

Most recently Bombs Away released a remix of Maddox Jones’ “Can’t Wait for the Summer”, and a reimagined take on Des’ree’s 90’s hit “You Gotta Be”, the latter of which broke onto the Billboard Dance charts. Tommy also teamed up with the production group RIP Youth working on their new hit single “Fake (feat. Ranger)”.