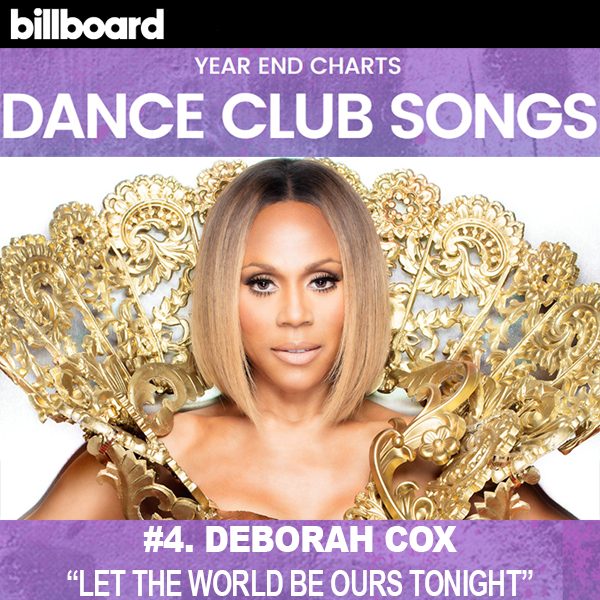 Billboard has released their Year End Charts for 2017 and Deborah Cox has claimed #4 on the 2017 Dance Club Songs Chart with her smash single, “Let the World Be Ours Tonight”.  At #4 the Grammy Award-nominated and multi-platinum R&B recording artist sits behind only Ed Sheeran, Dua Lipa and Rihanna for the top of the chart.

After its release this summer, “Let the World Be Ours Tonight” went on to hit #1 on the Billboard Dance Club Chart, giving Deborah Cox her thirteenth number one single on the chart. “Thirteen has always been my special number,” said Deborah in an interview with Billboard. “I’m over the moon about this! Yes…let the world be ours tonight!”

With the single being released on Radikal Records, this also means that “Let the World Be Ours Tonight” is the Top Indie Label Record of the Year on the chart!

A huge congratulations to Deborah Cox, alongside co-wirters and producers Soulshaker and Jenna Doyle! Everyone here at Radikal would like to thank all of the producers, remixers and promoters who worked on the record, and most importantly, the DJs and fans that helped take “Let the World Be Ours Tonight” to the top of the charts!

Thank you for supporting independent music!

The official remix package, “Let the World Be Ours Tonight (Remixes)” is also available for digital purchase on Amazon, Google Play, and iTunes and streaming on Apple Music and Spotify.