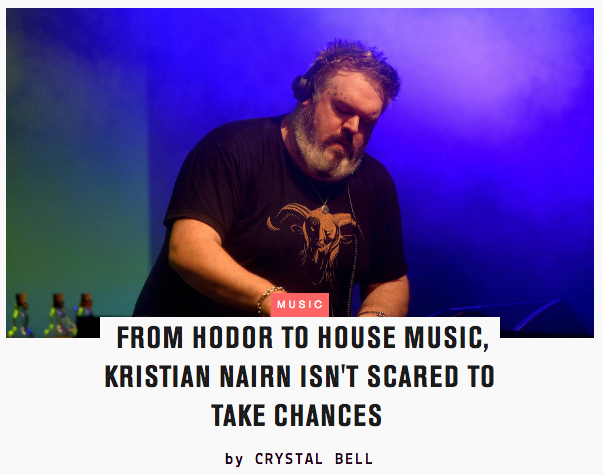 Last month, MTV News caught up with DJ Kristian Nairn before his outdoor set at Waterfront Park in San Diego, California, where they discussed his music career, balancing acting HBO’s Game of Thrones and music, and more! MTV News even caught up with Isaac Hempstead Wright, who plays Bran Stark on Game of Thrones, who had kind words about Kristian Nairn and his DJing. Read some of MTV News‘ exclusive and watch the clip below. For more visit http://www.mtv.com/news

DJ Kristian Nairn is an imposing figure. At seven feet tall, he could command the stage with his sheer stature alone, but this tatted up, burly Northern Irishman isn’t interested in commanding anything. He just wants the crowd to feel as swept away by the music as he so clearly is in his booth, swaying and towering over his console.

“There’s no point in being there if people aren’t enjoying themselves,” Nairn told MTV News before his outdoor set at Waterfront Park in San Diego, California, last month.

Though most people probably know him as Hodor on the HBO epic Game of Thrones — including the crowd of twentysomethings in costumes chanting “hold the door!” in the park — Nairn has been DJ’ing for over two decades. He’s a prolific musician, having studied both music and acting in college. “I’ve always known Kristian as the go-to guy for music advice,” Game of Thrones star Isaac Hempstead Wright told MTV News. “He’s not just a gimmicky DJ who’s in a show. He’s actually a very talented musician.”

From Hodor to house music: Game of Thrones’ @KristianNairn talks about his DJ’ing career ? https://t.co/GwO0Lga0d7pic.twitter.com/fSNarScMtb

So, no, Nairn’s not what some might call a celebrity DJ. For him, it’s not a hobby or an easy paycheck. It never has been. He lives and breaths the music, and it shows when you watch him at work — twisting knobs and checking levels while lost in the euphoric trance of the pulsating beat. This is Nairn in his purest form, his soul tethered to the music. “I pride myself on feeling free all the time,” he said. “I go on a little journey in my head when I’m on stage. I’m not one of the DJs who poses for the camera. I’m in a trance. The music takes me to a magical kingdom in my head.”

At 41 years old, Nairn might be a little older than your average DJ, but he’s not slowing down any time soon. In fact, he’s just getting started. He’s currently traveling across the U.S. with his Rave of Thrones set — it’s hard to believe that Nairn once balked at the idea of auditioning for Thrones — and he just dropped the music video for his new original house track “Bigger” via Radikal Records. It’s a loud and upfront single, a perfect compliment to Nairn’s career.

“If something’s written on my tombstone,” he said, “it will be that I wasn’t scared to take chances.”